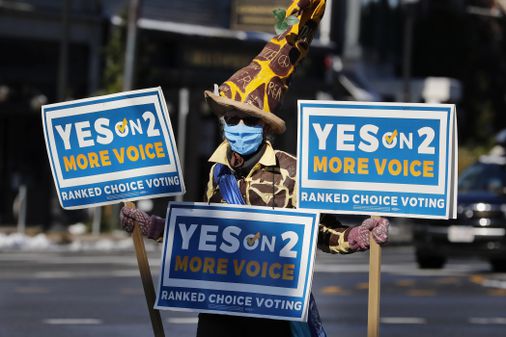 The failure of ballot Question 2 is a loss for democracy.

As the nation nervously awaited the results of the most polarized presidential election in recent history, Massachusetts voters made the mistake of soundly rejecting an innovative tool to fight hyperpartisan politics. Despite a multimillion-dollar campaign behind it, and an impressive cadre of high-profile bipartisan endorsements, the Commonwealth turned down ballot Question 2 on ranked-choice voting.

Preliminary results on Tuesday showed the yes side lost by roughly 10 percentage points. The system, where voters rank candidates in order of preference instead of voting for single candidates, would have made many state, county, and federal elections in Massachusetts fairer by making sure that whoever won those races had the support of the majority of voters and not just an electoral plurality. It also would have gotten rid of the “spoiler” effect that discourages many qualified independent and third-party candidates from running for office, out of fear that they’ll just split the vote with candidates with whom they have overlapping platforms. And it would have allowed voters to choose their actual favorite candidates in those elections rather than strategically voting for the person most likely to prevent their least-favorite candidate from winning.

But it also might have been an electoral reform too complicated to explain to voters in the midst of the coronavirus pandemic, which hampered education efforts about what ranked choice is and what it isn’t, according to Greg Dennis, policy director at the Yes on 2 campaign. Under ranked-choice voting, if a candidate earns more than 50 percent of first-choice votes, that candidate is declared the winner. If no candidate reaches a majority, the candidate with the fewest first-choice votes is eliminated, and his or her votes are redistributed according to the second choices voters marked on their ballots, until a candidate clears 50 percent. If it had passed, ranked-choice voting would have taken effect in 2022 and would have applied to elections for the state legislature, county offices, statewide positions like governor and attorney general, and federal races for Congress. It would not have applied to municipal or presidential elections.

“We’ve known all along that once we’re able to inform someone about how ranked choice works, they support it,” said Dennis. “We just didn’t get to enough people in time.” Had it not been for the pandemic, Dennis said, “We would have been door-to-door canvassing, having conversations with people all over the place.”

A similar statewide measure on the 2020 ballot in Alaska is on track to lose. The biggest lesson from the measure’s defeat is that ranked choice may be an electoral reform better pursued incrementally, city by city and town by town. Once residents are educated and get enough practice on the ranked-choice voting process at the municipal level, they may be more open to implementing it for statewide and some federal offices.

According to Dennis, ranked-choice was on the ballot in five localities in the United States this election: Albany, Calif.; Eureka, Calif.; Bloomington, Minn.; Minnetonka, Minn.; and Boulder, Colo. They were all approved by voters on Tuesday. In the last couple of years, Easthampton and Amherst joined Cambridge as the Massachusetts municipalities that have adopted ranked choice. (In a nonbinding referendum, Lowell voters rejected it last year as part of a larger overhaul to its electoral system to achieve better representation of communities of color, despite one study showing that ranked-choice voting had “ much stronger prospects for minority representation .”)

A look at the map of how Massachusetts cities and towns voted illustrates how ranked choice was defeated and offers another lesson. Consider what liberal enclaves did: Voters in both Cambridge and Somerville supported ranked choice by a more than 3-to-1 ratio. (Cambridge has used a more complex form of ranked-choice voting for 80 years for its City Council and School Committee elections.) In contrast, the measure was repudiated by more conservative voters in the central and western parts of the state. This suggests the idea is very popular among progressives, but not outside that bubble. Advocates of ranked-choice voting ought to do more on-the-ground outreach across the regions of the Commonwealth to build support for municipal experiments in hostile territory.

It also didn’t help the cause that Governor Charlie Baker came out against the measure days before the election, using a specious argument. Baker suggested that ranked choice is “very complicated” and that the “counting process alone could get unbelievably difficult.” But Baker’s thinking flies in the face of the facts. Ranked-choice voting has been practiced for many years in many places successfully. According to Fair Vote, a nonpartisan group that supports various electoral reforms like ranked choice, the method is used in municipal and federal elections in 26 states and roughly 10 million voting-age Americans live in jurisdictions that currently use ranked-choice voting or plan to implement it in their next elections.

It may be too soon to learn how the vote broke down demographically in Massachusetts, but the Yes on 2 campaign points to some indicators that young voters favor ranked-choice voting in impressive numbers . “A UMass Amherst poll showed that 83 percent of voters under the age of 30 support the measure," Dennis said. “We might have lost this initiative but we might have won the future.”

Massachusetts showed it wasn’t ready to jump into ranked-choice voting in 2020. But the idea still holds promise and could spread incrementally here and around the country until it becomes more routine and proves its worth and ease to voters. The future of our elections, and indeed, of our democracy, would be better served by a system where the majority reliably picks who serves in public office.