Gabriella Novello :: WhoWhatWhy
We live in a two-party electoral system, with each side more opposed to compromise than ever before. What if we could rank more... 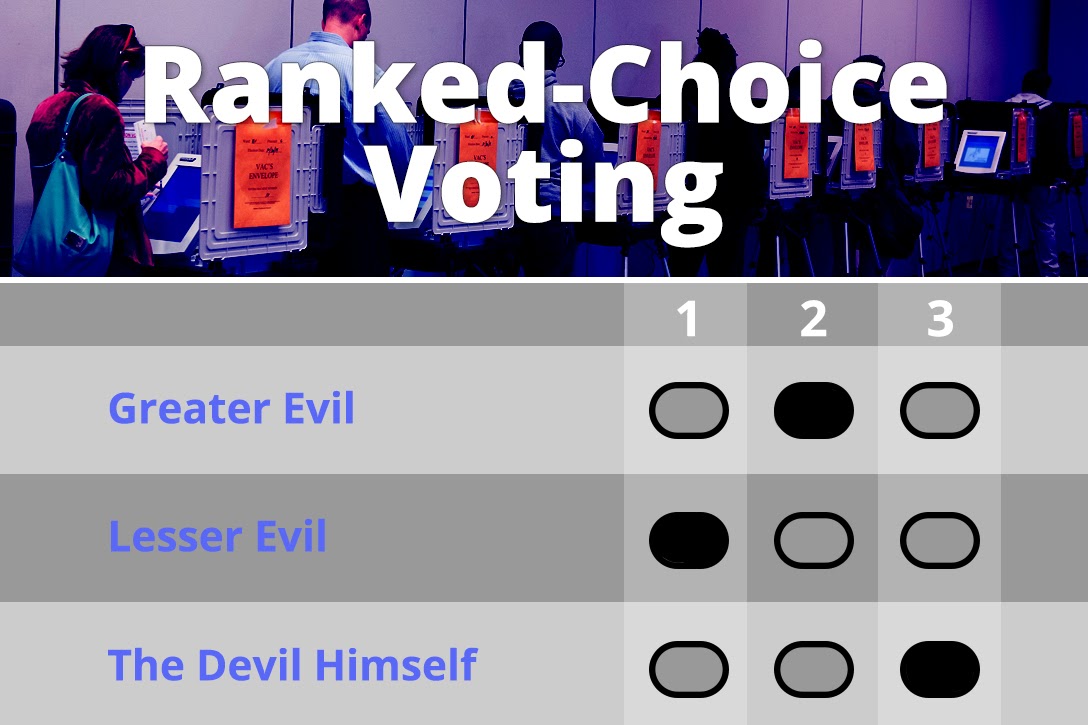 Election Day will be November 3, but there’s little agreement on anything else. In America Decides 2020 , editors and reporters for WhoWhatWhy explore the critical issues concerning who can vote, how ballots will be cast, and how they will be counted — questions that could shape US democracy for years to come.

If you walk into a grocery store and can’t find the name brand you are looking for, you pick the next best thing rather than go home empty-handed.

You may not realize it, but the selection you made involved ranking the items you bought in order of preference. You couldn’t find the brand that you wanted so you picked the next best thing. What if we could apply the same principle to elections?

In fact, some elections do offer the possibility of ranking your choice of candidates according to preference. It is called “ranked-choice voting.” Currently, Australia, Ireland, New Zealand, Northern Ireland, and Scotland all offer variations of ranked-choice voting. And, in the United States, the Iowa caucuses are effectively based on ranked-choice voting. Voters stand in their preferred candidate’s corner and hope that their chosen candidate will win 50 percent of the total votes.

Here’s what you need to know about ranked-choice voting:

What Is Ranked-Choice Voting?

In ranked-choice voting, a voter ranks candidates on the ballot in order of preference. If a candidate receives at least 50 percent of the total votes cast, then the election is over and the winner is declared. If no candidate manages to get a majority, then the candidate with the least amount of votes is eliminated and the votes that would have gone to him or her are allocated to the voter’s second choice marked on the ballot. This process continues until one candidate reaches at least 50 percent of the total votes cast.

Let’s use as an example a recent opinion poll that used ranked-choice voting. The election integrity group FairVote partnered with SurveyUSA to conduct a ranked-choice “election” among Democratic voters to determine their favorite candidate for vice president.

Voters were required to rank seven candidates. California Sen. Kamala Harris, the eventual nominee, received 26 percent of the first choice votes. Massachusetts Sen. Elizabeth Warren received 22 percent, and former National Security Advisor Susan Rice received 14 percent. Other candidates, including Georgia Democrat Stacey Abrams, Illinois Sen. Tammy Duckworth, Florida Rep. Val Demings, and California Rep. Karen Bass followed in order, so Bass was the first candidate to be eliminated. In spite of the redistribution of votes, none of the candidates managed to reach the 50 percent threshold during the first round. Demings was eliminated during the second round, Duckworth during the third, and Abrams during the fourth. During the fifth round, Rice was eliminated and Harris finally emerged as the winner with nearly 55 percent of the total votes cast.

Drew Penrose, who directs law and policy for FairVote, told WhoWhatWhy that a major advantage of ranked-choice voting is that it allows a person to cast a vote based on policies rather than personalities. The concept of a “spoiler candidate” — someone who draws votes away from a major party candidate despite having little chance of winning themself — is thrown out the window because their votes will ultimately go to one of the major party candidates if their first choice does not win.

“If your favorite [candidate] is eliminated, your vote can count for your backup choice,” Penrose said. “It helps make sure that we get to a majority outcome, have more choices, and it makes your vote more powerful.”

Ranked-choice voting follows the same process as an in-person caucus, but does not require a voter to spend hours at the polling place. It acts as a safeguard against the technology failures that we saw in Iowa, because ranked-choice voting is almost always done by using hand-marked paper ballots (or on a ballot-marking device). Rosemary Blizzard, education director for the Ranked-Choice Voting Resource Center, told WhoWhatWhy that her organization is currently assessing how ready states are to implement ranked-choice voting on electronic voting machines.

What States Use This System?

Several states already use it in state and local elections. In Cambridge, MA, voters have ranked candidates for its nine-seat city council and six-seat school board since 1941. Cincinnati and Cleveland also vote this way in city council races, and New York City will begin using it in 2021.

Ranked-choice voting will also be used this November in Alaska, Massachusetts, and North Dakota for all state-level elections, and there will be several local ballot measures to consider it in California and Vermont. Penrose said that he has never seen ranked-choice voting used in so many places, especially at the state level.

Is This Even Constitutional?

There is no constitutionally-mandated method in which states must carry out an election, although that has not prevented critics from challenging ranked-choice voting in court. It was most recently upheld by the US District Court for the District of Maine in 2018.

“In Maine, Republicans have become fairly oppositional even as Republicans in other states are very supportive of the measure, and that just has to do with who won in the early races,” Penrose said.

“The loser of Maine’s 2nd Congressional District election in 2018 became a very vocal opponent,” Penrose added. “He happens to be a Republican, and so he brought along the Republican establishment in Maine.”

The case in Maine, Baber v. Dunlap , was filed by supporters of Republican Bruce Poliquin, the then-candidate for the state’s 2nd Congressional District race in 2018. The plaintiffs argued that ranked-choice voting was unconstitutional because the ballot and instructions were “too confusing and that the manner by which [the defendant] tabulated the votes diluted the votes cast by Poliquin supporters.”