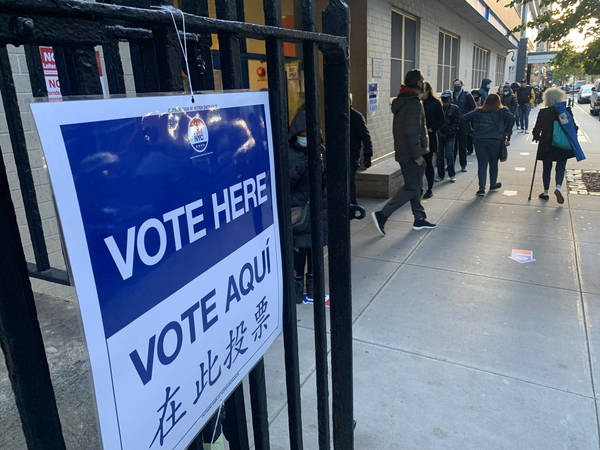 New York, NY—Ranked-Choice Voting made its official debut earlier this year in two special City Council elections in Queens, but will be available for the first time in citywide elections in the June primaries for the offices of Mayor, City Council, City Comptroller, Public Advocate and Borough President. Last week, two City Council District 5 candidates hosted a ranked-choice voting town hall to make sure that residents know and familiarize themselves with the new system of voting.

Kim Moscaritolo and Tricia Shimamura invited guest speakers from the Four Freedoms Democratic Club, East River Democratic Club and an organizer from Rank the Vote NYC, which was founded in 2019 to bring Ranked-Choice Voting to New York City.

Nicole Yearwood of Rank the Vote NYC first explained the circumstances that contributed to the debut of the new system of voting in New York City.

Back in September 2009, the expensive, but low turnout for the run-off elections for the offices of Public Advocate and City Comptroller led to conversations about the merits of using one-off elections.

Following that run-off, in 2010, then-Council Member Gale Brewer introduced the first Ranked-Choice Voting bill in the City Council and eight years later, in 2018, the New York City Charter Revision Commission explored the issue but concluded that more time was needed to make a decision.

Then in 2019, the Commission put Ranked-Choice Voting before New York City voters and the referendum passed with 75 percent of the vote.

Under the previous system of voting, Yearwood adds, a city council candidate was elected using plurality—basically whoever gets the most votes wins.

“But in a situation where you have multiple candidates—in my council district there are about 12 candidates running—someone could win with about 20 percent of the vote, but what that means is that 80 percent of the people in that district selected someone else.”

But with Ranked-Choice Voting, voters will be able to rank up to five candidates, including a write-in if they so choose, and a candidate will need more than 50 percent of the first-choice ballots counted to be declared the winner.

But say a candidate doesn’t emerge with a majority from those first-choice ballots—what happens next is that there are rounds of voting until a candidate secures more than 50 percent.

After the first round, the candidate with the fewest votes is eliminated. People who voted for an eliminated candidate will see their vote distributed to their next-highest ranked candidate in the next round of voting.

With the probability of additional rounds of voting, there is a chance that a candidate will not emerge victorious on Election Day. Indeed, in the recent 31 st Council District race in Queens, it took more than three weeks of waiting. The vote tally took two-and-a-half days and went for nine rounds.

Yearwood noted how you might rank the candidates. Your most favorite candidate in the race will obviously be your first choice because that candidate aligns with you on all the issues and policy questions that you have. Meanwhile, a second-choice candidate is your back-up candidate.

“The first-choice candidate—you may tell your family and friends to vote for them and volunteer, but this second-choice candidate is a good solid backup,” said Yearwood.

And of course, your third, fourth and fifth choices, she adds, you may not like them as much as your first and second choices, they may not check off all of your policy issues, but you think they would do a pretty good job in the district.

In the new system of voting, voters can continue to choose only one candidate without ranking the others, but Yearwood noted you are forfeiting your power with the more choices you are provided.

“Let’s say, for example, you pick the last place candidate, but you didn’t rank any of the other candidates—your vote has nowhere to go. The upside of ranking is even if your favorite candidate is not elected you ultimately still have a voice in who is going to represent the district,” Yearwood said.

Meanwhile, Jerry Ferguson, president of the Four Freedoms Democratic Club, said that he's known Moscaritolo and Shimamura for years and has been impressed with their engagement in local government.

“I love that this year I get to rank both of them, I just think that….to me, it is a way to respect what both contribute to this community and that to me is an important part of what Ranked-Choice Voting is about, and I think we are going to see it transform our city elections in a very positive way,” said Ferguson.