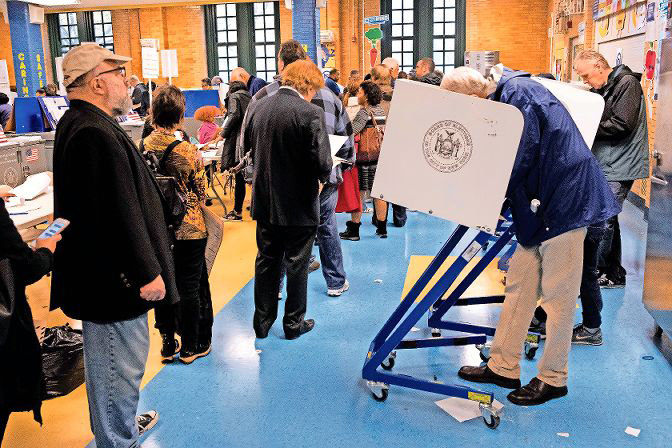 The presidential election may finally be over, but voters in this part of the Bronx aren’t done with the ballot box quite yet.

Mayor Bill de Blasio is expected to call a special election in March to replace outgoing councilman Andrew Cohen. There are expected to be at least a half-dozen names on the ballot. But unlike special elections of the past, voters won’t be forced to choose just one. Instead, they could pick most of the seven.

The new year means a new way to vote in city elections with ranked-choice voting taking over. Instead of choosing just one candidate, voters can rank their choices from their most-preferred to least. It’s a system resurrected from nearly a century ago which proponents say will give a winner a chance to have majority backing — something that is almost all-but-impossible in races with more than two candidates.

Yet, that might all go away if Eric Adams has his way. The Brooklyn borough president, who’s also eyeing de Blasio’s job at City Hall, is calling on the city’s elections board to delay ranked-choice voting. With the coronavirus pandemic and all the other distractions out in the world today, elections officials have not properly educated voters on how to use the new system.

Because of that, Adams warns, those voters — especially those in ethnic minorities — might not understand the new system and fail to use it properly. Because of that, he’s imploring the city council to give the elections board more time.

Adams even has support of more than a dozen city council members, who are part of its “minority caucus,” who believe not-so-savvy voters aren’t ready to use the new balloting system approved by many of the very same voters in a 2019 referendum.

In a letter to council Speaker Corey Johnson, the council members said the elections board’s “history of failure was underscored this year by a series of embarrassing incidents that many New Yorkers of color rightly perceive as akin to voter suppression,” according to published reports. That included delays in sending out absentee ballots — and errors on some after they were delivered — as well as long lines at polling sites.

“Rather than forge ahead with BOE’s slipshod implementation process,” the council members said in the letter, “we have an obligation to pause this transformation.”

There seems to be little indication the city council will delay ranked-choice voting, but during a recent candidates forum hosted by the Benjamin Franklin Reform Democratic Club, some of those vying to take a seat on the council — and who would be affected by any problems with implementing ranked-choice voting — said they wanted the new system to start as planned.

Another candidate expected to appear on the March ballot, Jessica Haller, said the elections board has an implementation problem. However, that shouldn’t stop the city from moving forward with ranked-choice voting.

City lawmakers should indeed take action on this, she said. But not in the way Adams and some of the council’s minority caucus would like them to.

“The city council needs to call hearings and make sure that we are implementing the things that were promised for the people of this city,” Haller said.

Some of the other candidates took to Twitter after the forum after the question was posed by political activist Jack Marth. Marcos Sierra, one of the few candidates running from the east side of the Jerome Park Reservoir, said ranked-choice voting was necessary as a way to help the Bronx overcome what he has described as “abysmal turnout” in the past.

“I’m against this effort to thwart ranked-choice voting, which was passed by 73 percent of voters in a 2019 ballot proposal,” the candidate tweeted. “I do think we need to put in a lot of effort to inform voters that (ranked-choice voting) started in 2021, and how it works.”

For Eric Dinowitz, ranked-choice voting is part of a larger package of reforms designed to attract more voters to the polls, and ensure their voices are heard. But like Padernacht, he also believes the education aspect of rolling out such reforms is important in order to make them successful.

“It is essential that the board of elections implements this new system with a fully funded educational component that is accessible and multilingual, especially focusing on Spanish-language access here in the Bronx,” Dinowitz told The Riverdale Press , in an email. “I still believe that there is time to do so, and we can avoid a delay. But the board needs to step up its engagement immediately, as vote-by-mail and early voting speeds up the timing of any election.”