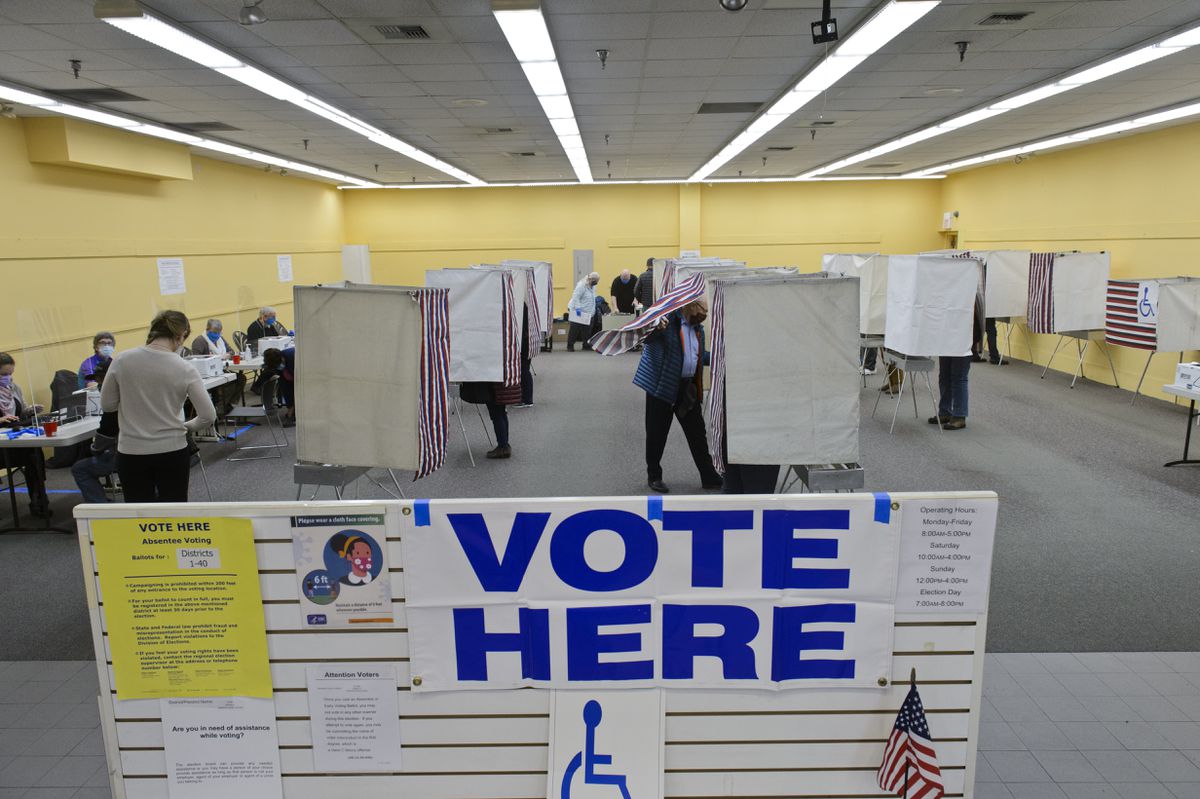 When Maine’s pioneering attempt to install ranked-choice voting was met with a flurry of lawsuits, Alaskans expected the same thing after voters here approved a sweeping election-reform law in November.

So far, that hasn’t happened. Only a single lawsuit has been filed in state court to block implementation of the state’s new election system, approved as Ballot Measure 2, and no challenges have been filed in federal court.

Alaska’s first election under the new system is more than a year away, but one candidate has already begun a campaign to challenge incumbent U.S. Sen. Lisa Murkowski. Until that lawsuit is resolved, voters and candidates won’t know the rules for the state’s election.

The state’s Republican and Democratic parties have stayed out of the legal fight, and experts suggest that internal party politics and the expense of a lawsuit have kept them away. The lone case was brought by the chairman of the Alaskan Independence Party and a Libertarian candidate for the state legislature.

“I would have expected by now to pick up two, three, four, well-financed parties attacking this thing. And you can see, and I can see, it hasn’t happened,” said Scott Kendall, an attorney who wrote the measure and is now defending it in court.

“I was totally surprised,” said Anchorage attorney Ken Jacobus, who is representing the plaintiffs and has argued that parts of the measure conflict with the Alaska Constitution.

In a request for summary judgment , he said Ballot Measure 2′s ranked-choice system for electing the governor and lieutenant governor amounts to a runoff election. That’s illegal, he argues, because the plain text of the constitution says that “the candidate receiving the greatest number of votes shall be governor.”

Jacobus is unpaid and working alone. Last year, he was hospitalized for months for a condition compounded by a COVID-19 infection.

“I was in the hospital for 10 months, and I was supposed to have died, but the Lord let me live for some reason. And this has got to be part of it,” he said.

The lawsuit pits him against the state of Alaska, which is representing the Division of Elections, and the well-funded group that promoted the ballot measure.

“I feel like I’m like the little Dutch boy, Hans Brinker, with his finger in the dike, trying to prevent this flood from coming over Alaska,” he said.

Documents filed Thursday outline a tentative schedule that calls for all sides in the lawsuit to trade written arguments before mid-May. After that, Anchorage Superior Court Judge Gregory Miller could hear arguments in court and render a verdict.

Regardless of the result, Jacobus and Kendall said they expect it to be appealed to the Alaska Supreme Court in the fall.

Alaska’s next statewide election is more than 18 months away, but because of the speed with which the court system operates, there are practical deadlines if someone wants to file a legal challenge.

“I think you probably don’t have a hard deadline on a constitutional issue,” said Craig Richards, a former Alaska attorney general now in private practice. “If it’s unconstitutional, it’s unconstitutional. That being said, there’s a practical deadline that if you wait until three weeks before the election, the courts aren’t going to be very sympathetic to you, in terms of, you know, hurrying the case along.”

“So I would think if someone wants to get a conclusion to these answers before the next election ... they would need to file fairly soon,” he said.

The Alaska Democratic Party stayed neutral during the campaign involving Ballot Measure 2, and a spokeswoman for the party declined to say whether the party would become involved with any lawsuit. Former Democratic U.S. Sen. Mark Begich, who opposed the measure, did not answer a call seeking comment Thursday.

The state Republican Party contributed to the campaign against the measure, and many Republicans voted against it.

Bob Bird, chairman of the Alaskan Independence Party and one of the plaintiffs in the lawsuit, said he believes there is broad support in the Republican State Central Committee for joining the lawsuit.

“Glenn Clary is the guy who’s dragging his feet,” he said, referring to the party’s state chairman.

“No decision has yet been made,” he said. “The party is considering all of its options.”

Marc Hellenthal, a longtime Alaska political consultant, suggested that funding issues and internal Republican divides are contributing to a lack of action by party leaders.

“Whoever wants to litigate has got to bring their checkbook,” he said.

Clary said, “If the party decides legal action is the right course, resources will not be an obstacle.”

“The other is, apparently, leadership is choosing not to act.”

Next year, Republican U.S. Sen. Lisa Murkowski will be challenged by former state administration commissioner Kelly Tshibaka , another Republican. Other candidates are expected to enter the race.

Tshibaka is more conservative than Murkowski, giving her a potential advantage during a primary election in which only Republicans and independents would decide the winner. In 2010, conservative Joe Miller defeated Murkowski in such a primary. (Murkowski returned as a write-in candidate during the general election and won.)

Under the state’s new primary election system, Murkowski wouldn’t risk a repeat of 2010. All candidates will be lumped together in the primary, and the top four vote-getters, regardless of party, will advance to the general election.

Murkowski has broad name recognition in Alaska, and the Ballot Measure 2 approach could be favorable to her in the new top-four primary, Hellenthal said.

“It’s pretty obvious: If you want to get Lisa out of the race, the best way to do it is to rescind Prop 2,” he said.

Randy Ruedrich is a former state chairman of the Alaska Republican Party and treasurer of Tshibaka’s campaign. Asked about Hellenthal’s comment, he said, “You run a campaign based on the law that you’re working with. It changes the strategy, it doesn’t change the result.”

“I think you just plan your campaign based on what the election law of the year is,” he said.