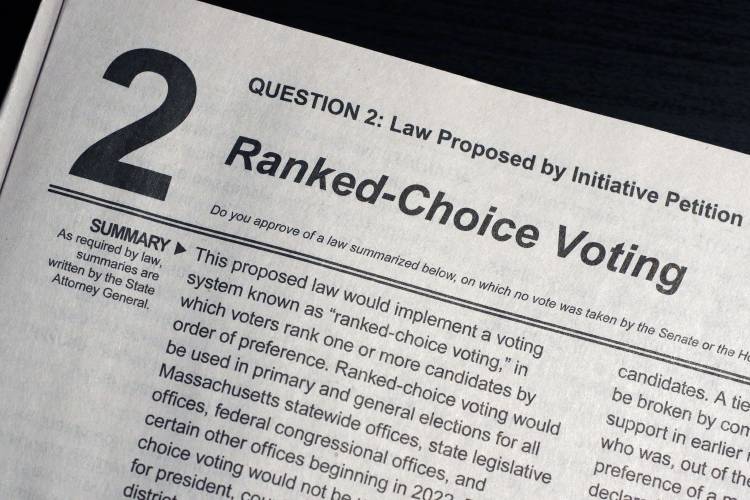 A summary of Ballot Question 2, known as a “Ranked Choice Voting” law, in the Nov. 3, 2020, Massachusetts election is displayed in a handbook provided to voters by the Secretary of the Commonwealth, Sept. 23, in Marlborough, Mass. AP Photo/Bill Sikes

With Election Day just weeks away, voters are preparing to make leadership decisions that will determine the course of our nation’s future. In Massachusetts, voters will have an equally important decision to make that will impact all of our state’s future elections: whether or not we adopt the ranked-choice voting system for state and federal elections. Ranked-choice voting is a simple system that grants voters more power at the polls, produces leaders that genuinely represent their constituents’ interests, and restores some civility and productivity to the hyper-partisan politics that currently consumes our news cycles.

In a ranked-choice voting system, instead of voting for just one candidate for each office, voters are able to rank all of the candidates running for a given position. It’s as simple as “1-2-3,” starting with your top choice and working your way down. When the polls close, all of the votes are counted. If no one wins a true majority on the first count, the candidate who received the fewest votes is eliminated, and those votes are counted toward the second choice listed on each ballot. This process is repeated until one candidate has earned a majority of the votes.

With the concern of split voting blocs eliminated, more candidates, especially more diverse candidates, are incentivized to run for office. With more names on the ballot, voters have more — and often better — choices for leadership. Candidates who are willing to put in the grassroots work of connecting with voters and building coalitions have a higher chance of success, even if they don’t have the highest fundraising numbers or the advantage of an incumbent’s name recognition. And when leaders who truly represent the majority come together, our legislative bodies will spend more time legislating and less time engaging in partisan bickering and stonewalling.

America’s voters are exhausted from hyper-partisan politics and politicians who don’t keep their campaign promises. The ranked-choice voting system is a simple change to our elections that could produce better leaders who will actually work for the voters who elected them. Vote “yes” on Question 2 this Election Day, and help us bring ranked-choice voting to Massachusetts.