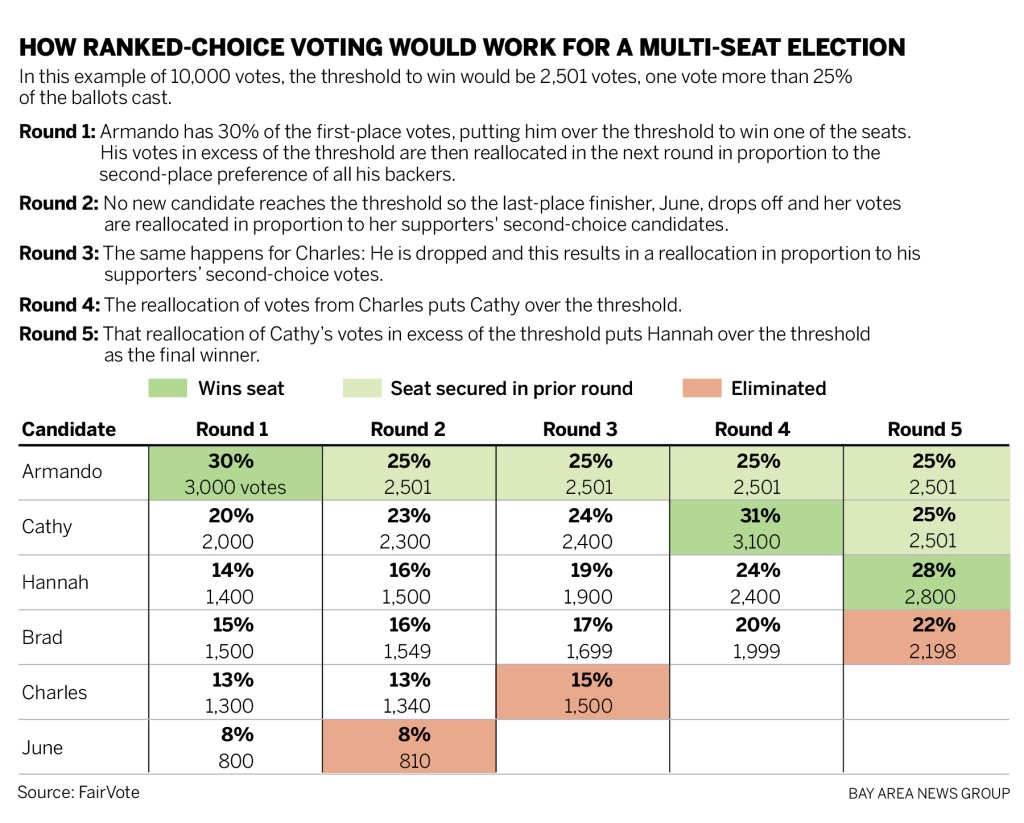 Local city council and school board elections in California are often plagued by at least one of two problems:

First, in races with large numbers of candidates, winners are often selected with the backing of only a small portion of the electorate.

Second, minority groups are often proportionately underrepresented on elected boards because minority voters don’t unite behind a single candidate or don’t have enough votes to prevail.

The second issue is a particular problem for Albany. Asian Americans make up a quarter of the population, but only one has been elected to the City Council in the past 25 years.

A group of Albany residents are proposing a smart solution that addresses both issues. Their plan would change the city’s elections to ranked-choice voting. They launched an initiative to place their plan before voters. But when the pandemic interfered with their signature-gathering drive, the City Council used its authority to put Measure BB on the Nov. 3 ballot.

Voters should support it. Other cities that operate under their own charters should also consider ranked-choice voting. And, as the nation grapples with its history of racial inequity, Gov. Gavin Newsom should drop his objection to ranked-choice voting so that California’s general law cities can also have the option.

Under ranked-choice voting, voters order their candidate preferences. If their first choice does poorly, their vote is then transferred to their next choice. In the Bay Area, Oakland, Berkeley, San Leandro and San Francisco use the system.

What makes Albany’s plan different for California is that it would be applied to races in which more than one person is selected. Cambridge, Mass., Eastpointe, Mich., Minneapolis, Minn., Australia, Ireland, New Zealand, Malta, Northern Ireland, Scotland, India, Nepal and Pakistan have been using ranked-choice voting for multi-seat races for years, according to FairVote, a ranked-choice voting advocacy group.

In California, ranked-choice voting potentially could protect cities from state voting rights litigation that has been proliferating for years. Jurisdictions where minorities are underrepresented on the governing boards face threats of costly lawsuits if they don’t convert from at-large elections to balloting by district. Albany currently faces such a threat.

Most jurisdictions have capitulated. But the districts, which are redrawn every 10 years, cannot always be drawn to strengthen minority voting rights because individual racial groups are not necessarily geographically concentrated.

Ranked-choice voting was recently agreed to as part of a settlement to a voting-rights lawsuit in Palm Desert. The system can provide a better alternative for bolstering minority representation, especially when racial groups are not geographically compacted.

To understand why, consider a race for three seats: In a traditional at-large election, each voter has three votes, so a majority group voting as a bloc can determine the outcome of all three seats. In contrast, ranked-choice voting essentially gives each voter one vote — giving votes of minority groups greater weight and making proportional representation more likely.

Then, the last-place finisher would drop off and that person’s votes would be transferred to those voters’ second choice. This reallocation would continue until there are three candidates each with more than 25% of the vote.

It’s a bit complicated. But it ensures that no one wastes a vote on a last-place finisher; eliminates the incentive to run candidates who will split the vote for an opponent; strengthens minority representation; and, for cities threatened with litigation, provides an alternative to politically charged decennial redistricting that doesn’t necessarily improve minority representation.