Future of ranked-choice voting in limbo in Amherst 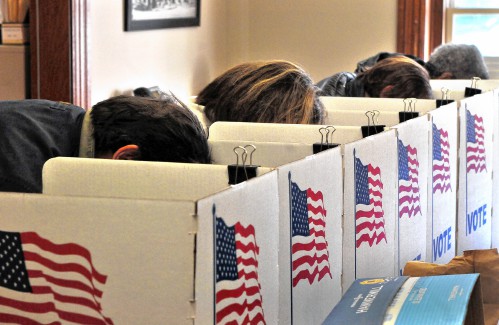 AMHERST — Town Council is ready to have voters use ranked-choice voting for the November 2021 municipal election, but it appears unlikely that Amherst will be able to get legislative support in time.

Though councilors voted 13-0 this week to adopt a report from the Ranked Choice Voting Commission, and send a letter to petition the Legislature, Town Manager Paul Bockelman said Tuesday that conversations with Amherst’s delegation indicate having the voting method in place will be a significant challenge.

“At this point we need special legislation from the state to implement,” Bockelman said. “Chances are slim to none that will happen.”

Ranked-choice voting is a method in which voters put candidates in order of preference, rather than being capped at voting for one candidate or a set number of candidates under what is known as plurality voting.

Both state Rep. Mindy Domb, D-Amherst, and state Sen. Jo Comerford, D-Northampton, have informed town officials they are prepared to file legislation for a special act on behalf of Amherst, and will also endorse the legislation.

“They will do everything they can to help secure its passage,” said Council President Lynn Griesemer.

But factors outside their control, including the ranked-choice ballot initiative being defeated by voters statewide this fall, have dampened enthusiasm for the concept, even though Amherst voters gave it widespread support.

At-Large Councilor Mandi Jo Hanneke said when the Charter Commission was putting together the town charter, its members were under the impression that enactment could be done at the local level and become law at the end of 2020.

“It did not at that time believe or assume that it would need to go to the Legislature for special legislation,” said Hanneke, who was the vice president of that commission.

Voters then passed the town charter in March 2018, requiring the Town Council “to adopt the proposed measure with or without amendments within 90 days of receipt.”

Before ranked-choice voting begins, the town would also have to buy new voting machines that can accept this format. LHS Associates of Salem, New Hampshire has provided the town a $71,500 quote for Dominion Imagecast machines, including 11 precinct tablets, and an associated software bundle, along with an $800 annual license fee for the software.