How do readers wrap their heads around ranked-choice voting? Let us count the ways 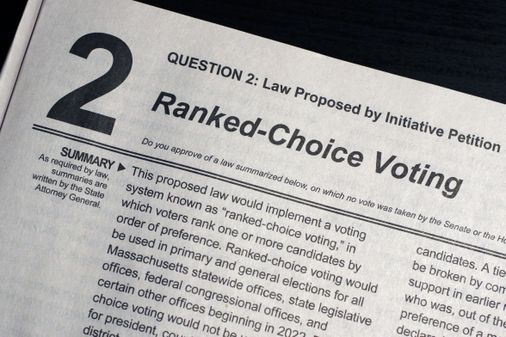 How do readers wrap their heads around ranked-choice voting? Let us count the ways

Don’t perpetuate the myth that certain votes will count less

For the most part, this is not true. In a general election, if a voter votes for only one candidate from either major party, that vote will count each and every time. That is because the two parties will finish first and second in the first round, and that vote would carry over to the next round of voting.

It is true that if you vote for a third party such as the Green or Libertarian party and do not cast a second-choice vote, your ballot is “exhausted” after the first round. But in reality, RCV empowers voters to support their third-party preference, because they can confidently vote with their heart with their first choice and vote with their head and select the major-party candidate who best represents their views as their second choice. If a voter is adamant about supporting only a third-party candidate, that is their right.

Unfortunately, what is actually a benefit of ranked-choice voting — overcoming the so-called spoiler effect that limits third-party voices — is being distorted into a bad thing for democracy, when it is a benefit.

Eitan Hersh says that the negatives of ranked-choice voting outweigh the positives. Nonsense.

Hersh suggests that “ballot truncation” in RCV disenfranchises voters, but disenfranchisement is exactly what happens now when voters are forbidden to express even a second choice in a crowded primary.

As Hersh notes, there is palpable anger in Massachusetts’ Fourth Congressional District that, with just 22 percent of the vote in the Democratic primary, Jake Auchincloss is poised to replace Representative Joseph P. Kennedy III in Congress. Yet Hersh offers not merely no workable alternative, but no alternative at all to avoid governance by pluralities who represent minorities of voter sentiment. That’s not acceptable, neither by our voters nor by the requirements of any working democracy.

Eitan Hersh opposes ranked-choice voting in part because it gives “a leg up” to voters who have more time and interest to study a large number of candidates. But this imbalance already exists in our system and is inevitable. We vote for many offices, and not all voters fill out their whole ballot. Should we therefore scrap the electability of many public positions? What matters in our democracy is equal opportunity to participate, not equal use of such opportunities.

Hersh’s concerns, meanwhile, about the psychological impact of RCV on voters are hypothetical and unsubstantiated.

Ranked-choice voting fixes a major problem damaging our country — the tendency of our voting system to empower politicians who are more extreme than the majority. We need that fix, and the likelihood that voters will use these new choices to different degrees should not stand in our way.

The writer is executive director of Election Reformers Network.

RCV violates the one person, one vote principle

In your Sept. 30 op-ed debate over the issue of adopting ranked-choice voting in Massachusetts, proponent Danielle Allen’s statement that with RCV “one candidate earns support from a true majority” is self-evidently not true or, at the very least, a questionable matter of opinion. Opponent Eitan Hersh counters with all sorts of vague arguments of detrimental psychological effects of RCV and educational barriers to its fair application. Hersh’s arguments are not persuasive, especially when the basis given for their credibility is an unfinished graduate student dissertation, even if at the prestigious MIT.

A better argument is that RCV violates the core principle of our democratic electoral process: one person, one vote. RCV manufactures votes. The so-called “true majority” of RCV is based on more votes than the number of people who voted. That should never occur in a true democratic state.

Our two-party system isn’t working, but there’s a solution at hand

Jeff Jacoby’s column “How to not squander your vote” (Ideas, Oct. 4) inadvertently makes some good arguments for ranked-choice voting, despite his being against it (“Ranked-choice voting is the wrong choice,” Ideas, Sept. 20). Jacoby promotes “the power of minor parties in a democracy to influence public discourse.” But currently, as he observes, nonmainstream ideas are likely to be stamped out or drowned out by the entrenched two-party establishment. RCV would make it possible for more candidates with diverse backgrounds and ideas to have influence in politics.

Further, the argument that we should all go ahead and vote for who we like best because an individual vote has virtually no impact contradicts Jacoby’s basic premise. How we each vote does make a difference and, in a split race, can produce a winner whose views reflect less than a majority of voters. That is why people end up voting strategically instead of on principle. RCV eliminates the spoiler effect and ensures that the candidate who wins appeals to the broadest base of voters.

Success in politics often involves compromise. It’s hard to dispute that our current two-party system is polarized and paralyzed. RCV can reduce polarization and build coalitions, giving more people more voice. That sounds like democracy to me.

I enjoy reading Jeff Jacoby’s (more conservative) opinion pieces because they offer a balance to my more liberal leanings. However, I find fault in the inconsistency of two of his recent columns. In a Sept. 20 piece, Jacoby argues against ranked-choice voting, based primarily on the complexity of the ballot. In another piece two weeks later, he argues that it’s not wasting his vote when he casts his ballot for a minor-party candidate who has no chance of winning.

Surely Jacoby can see the inconsistency. By embracing ranked-choice voting, he could cast a first choice for the minority-party candidate yet have a positive effect on the final election outcome by identifying a second-choice candidate. Ranked-choice voting offers the opportunity to vote one’s ideals and pragmatic realities on the same ballot.