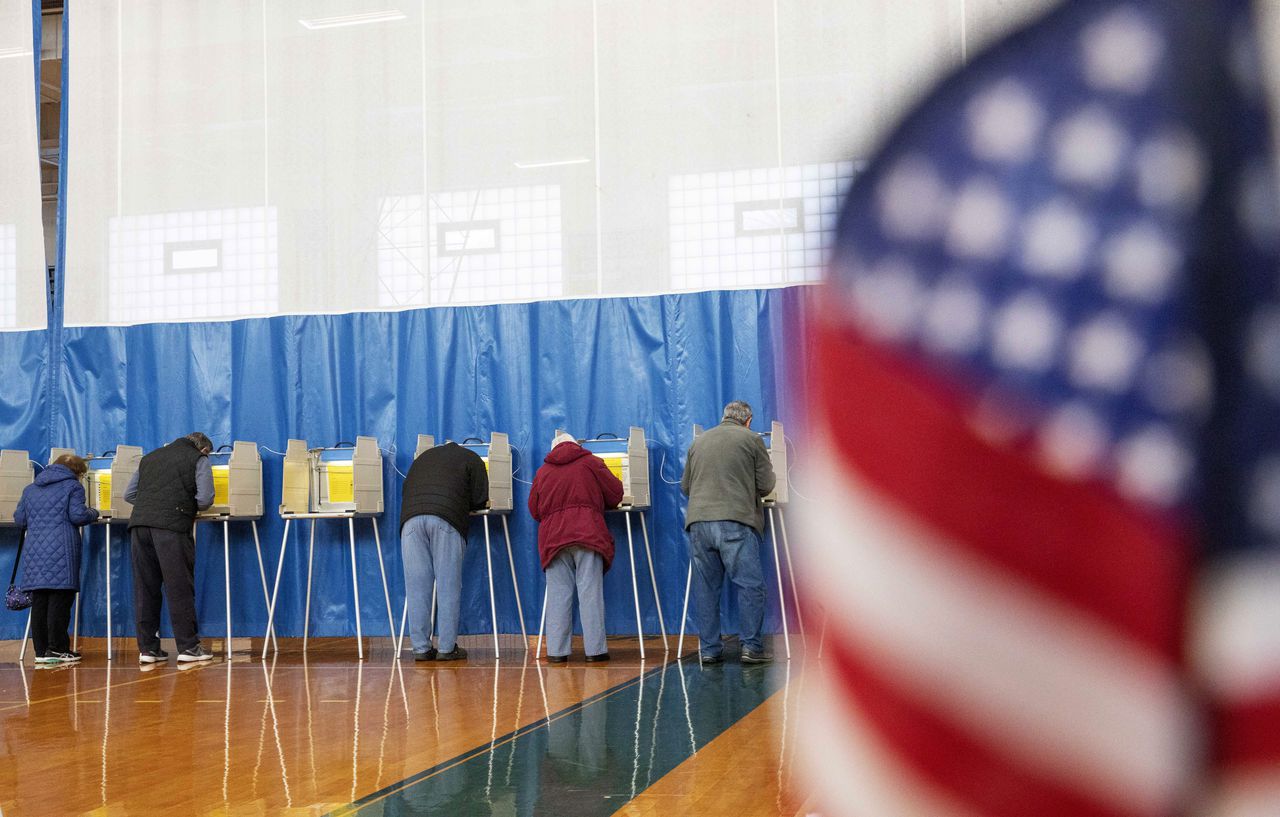 Massachusetts voters are being asked to re-evaluate exactly how they cast their ballots.

The second of the state’s two ballot measures proposes introducing a new kind of ballot for local and state elections would allow, specifically a ranked-choice voting system.

Here’s how it works: In elections with more than two candidates, voters rank their top choice and then select their second, third, fourth candidates and so on.

If no candidate gets more than 50% of the first-place votes, election officials would review the votes and eliminate the candidate with the least number of first-place votes. Each of those ballots that placed the losing candidate as the top choice would then be redirected to the second-choice candidates listed, and the results would be recalculated.

If that second round takes a candidate over the 50% threshold, a winner is declared. If not, another elimination round will commence. Whatever candidate is at the bottom is eliminated and those ballots are reviewed to go to the voter’s next choice. The process continues over and over again until a candidate captures the majority of the votes.

Proponents say this would enable voters to show support for the candidate they believe best aligns for their values, rather than focusing on a candidate who is considered the most viable.

“What ranked choice voting does is it builds consensus,” said Evan Falchuk, a former independent gubernatorial candidate and chair of the Ranked Choice Voting 2020 Committee. “Today in politics you take whatever issue there is, and it is used as a weapon against the other side, and so people end up talking past each other. With ranked choice voting, every candidate has an incentive to reach out and find 5 ways to agree as opposed to just disagree with each other.”

Opponents, however, say the process is confusing and could lead to unintended consequences.

“We should really be trying to make voting as simple as possible for people,” said Jennifer Braceras, a political analyst and board member of the Massachusetts Fiscal Alliance, which opposes ranked-choice voting. “The simplest possible election system is a system where you have binary choice.”

What does the ballot question propose?

This voting process would not apply to presidential elections. Nor would it apply to county commission or regional school district committee races .

The ballot would require the Secretary of State to impose regulations on how voters would mark the ballots. It also would create a “central tabulation facility” to calculate the results.

Under the proposal, the secretary would appoint election officers to oversee the process. Each state committee chair would appoint a computer expert to monitor the ballot counting. The secretary would be considered the presiding officer in this process and delegate responsibilities to the election officers to make sure the ballots are properly counted.

What happens if I vote yes?

A ranked choice voting system would be implemented in Massachusetts by 2022.

Proponents say this ballot measure would not only change voters' options, but would give candidates incentive to campaign to more residents and collaborate with opponents whose platforms are similar.

Jesse Mermell, who ran for the 4th Congressional District seat in the Democratic primary, told MassLive she saw coalition building when she campaigned for the late Brian Murphy in the 2001 Cambridge City Council race. Cambridge holds proportional representation elections, similar to ranked choice voting as proposed in the ballot question.

“There would always be groups of three or four candidates helping each other out,” said Mermell, now honorary co-chair and senior advisor to the ranked-choice voting campaign. “It very much changes the dynamic.”

Proponents of ranked choice voting, including Falchuk, say an alternate voting system could have changed the outcome of the one in the 4th congressional district primary. The race to fill the seat vacated by Rep. Joe Kennedy III grew crowded with nine Democrats and two Republicans.

By Sept. 1, there were still seven candidates on the ballot. Dave Cavell, a former senior adviser to Attorney General Maura Healey, and tech entrepreneur Chris Zannetos dropped out weeks earlier and backed Mermell. But by that point mail-in ballots were already being sent to election clerks. Jake Auchincloss beat Mermell by at least 1,506 votes , at the time ending up with 22.4% of the vote to Mermell’s 21.38%.

“The winner ends up with 22% of the vote, which means 78% voted for somebody else,” said Falchuk said. He called the primary election the “poster child” for why Massachusetts need ranked-choice voting.

Mermell said the outcome of the 4th Congressional District race isn’t the point. She said she backs ranked-choice voting, as many of the candidates in that race do, because voters can stop “playing political pundit” when they cast their ballots and vote for the candidate they like the best, rather than the one most likely to defeat a contender they don’t support.

“The point is making sure voters have a best mechanism at their fingertips to express their voices,” she said.

Braceras, who opposes the proposal, says implementing ranked-choice voting would actually make voters have to strategize like political pundits about which candidate is likely to come out on top when first-choice and second- or third-choice votes are combined.

Republicans in Maine, which approved ranked-choice voting in 2016, took issue with the process as U.S. Rep. Bruce Poliquin, a Republican, lost his re-election bid in 2018 despite getting the most first-place votes.

“I don’t think we should have a system where casting votes in a way that makes logical sense could actually end up hurting the person you want the most. You have to be a very sophisticated voter to anticipate that,” Braceras said, who laid out her own hypothetical in a 2019 op-ed in The Boston Globe .

Mermell, however, said the results of an elimination round or three wouldn’t be so confusing or surprising because at the end of the day, voters who don’t get their first choice at least had a chance to influence who the alternate was.

Mermell also disagreed that this alternative system would harm seniors or voters who speak a language other than English because the state is required to effectively communicate their rights and options like they are under the current voting system.

“I have a lot more faith in voters than apparently the opponents of this question do,” she said. “This has been the case in Cambridge in an incredibly diverse city with seniors, people who speak all sorts of languages.”

What if I vote no?

Candidates seeking recounts can file a petition up to three days after the results are announced.

How much does it cost?

The ballot question says no estimated cost has been determined. That doesn’t mean it’s free, but that it was hard to put an exact dollar figure at this point, Falchuk said.

Maine, which has ranked choice voting, spent close to $500,000 on its 2018 elections with $22,400 being spent each in the primary and general election for leasing RCV software.

The printing and delivery for a separate referendum ballot in the general election cost nearly $269,000 alone. The hardware startup, lease of a high-speed tabulator, courier services for both elections brought the total price tag up to $441,804.

Who is finding the proposal and the opposition?

The Ranked Choice Voting 2020 Committee has raised millions to push for the alternate voting system, including $2.6 million from Action Now Initiative , a Houston-based progressive nonprofit that is funding ranked-choice and other voting-related ballot questions across the country.

The committee has garnered thousands of individual contributions, ranging from $500,000 from Quadrivium president Kathryn Murdoch (daughter-in-law of Rupert Murdoch) to more than 1,000 donations under $25 with many of them from Massachusetts residents.

As of Sept. 20, the committee had close to $2.5 million on hand after spending donations on telephone messaging, social media marketing and overhead costs.

The opposition has published little financial information. In fact, no contributions had been filed until Sept. 20, when the opposition filed a $250 donation from the Westford Republican Town Committee. No expenditures were reported.

MassFiscal, listed as official opponents of the ballot question, has come under scrutiny in the past because the organization does not reveal its donors . The nonprofit isn’t required to do so under state law, except in cases like the ballot question campaign where the official organizers and opponents must report their contributions.