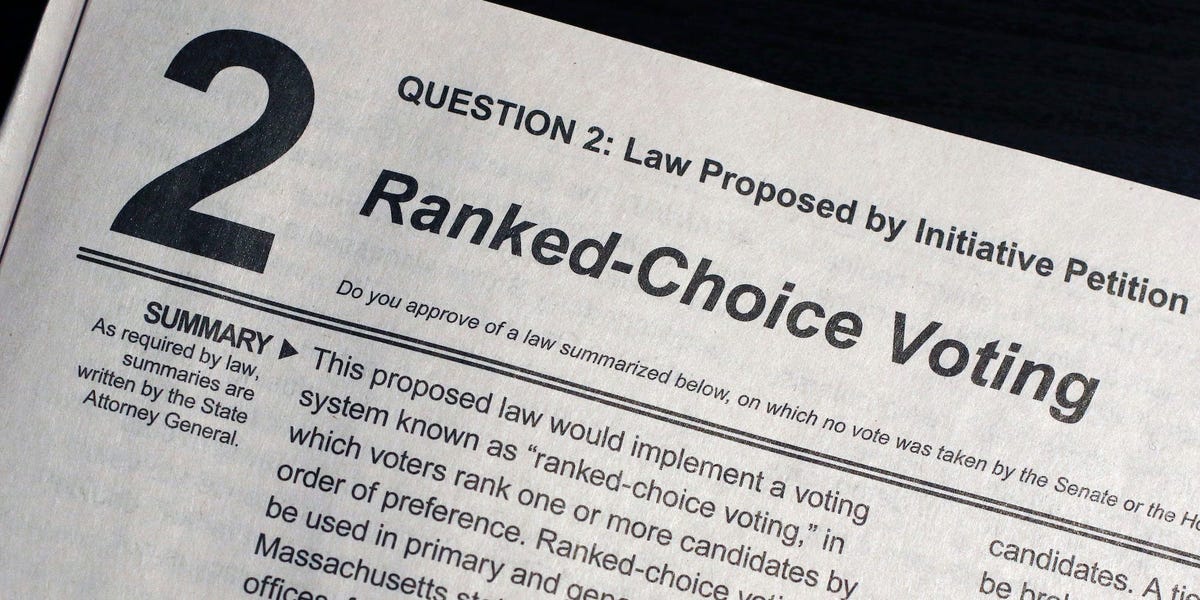 Massachusetts is voting on Question 2, a measure to enact ranked-choice voting in the state.

Voters would rank the candidates in order of preference instead of casting their vote for just one candidate, and the race would go to a ranked-choice runoff if no one candidate earns a majority.

If the measure passes, Massachusetts will start using ranked-choice voting in statewide, state legislative, and federal elections starting in 2022.

Massachusetts is voting on Question 2, a ballot initiative to enact ranked-choice voting for federal and state-level offices beginning in 2022.

Under that system, voters would rank the candidates in order of preference instead of casting their vote for just one, and the race would go to a ranked-choice runoff if no one candidate earns a majority of the vote.

Here's the language of the question as it appears on the ballot :

"This proposed law would implement a voting system known as 'ranked-choice voting,' in which voters rank one or more candidates by order of preference. Ranked-choice voting would be used in primary and general elections for all Massachusetts statewide offices, state legislative offices, federal congressional offices, and certain other offices beginning in 2022. Ranked-choice voting would not be used in elections for president, county commissioner, or regional district school committee member. Under the proposed law, votes would be counted in a series of rounds. In the first round, if one candidate received more than 50 percent of the first-place votes, that candidate would be declared the winner and no other rounds would be necessary."

"If no candidate received more than 50 percent of the first-place votes, then the candidate or candidates who received the fewest first-place votes would be eliminated and, in the next round, each vote for an eliminated candidate would instead be counted toward the next highest-ranked candidate on that voter's ballot. Depending on the number of candidates, additional rounds of counting could occur, with the last-place candidate or candidates in each round being eliminated and the votes for an eliminated candidate going to the voter's next choice out of the remaining candidates. A tie for last place in any round would be broken by comparing the tied candidates' support in earlier rounds. Ultimately, the candidate who was, out of the remaining candidates, the preference of a majority of voters would be declared the winner. Ranked-choice voting would be used only in races where a single candidate is to be declared the winner and not in races where more than one person is to be elected.

"Under the proposed law, if no candidate received more than 50 percent of first-place votes in the first round, the rounds of ballot-counting necessary for ranked-choice voting would be conducted at a central tabulation facility. At the facility, voters' rankings would be entered into a computer, which would then be used to calculate the results of each round of the counting process. The proposed law provides that candidates in a statewide or district election would have at least three days to request a recount. The Secretary of State would be required to issue regulations to implement the proposed law and conduct a voter education campaign about the ranked-choice voting process. The proposed law would take effect on January 1, 2022."