Multiple winners. Election quotas. The ‘Cincinnati Method.' Voting in Cambridge is a world unto itself. 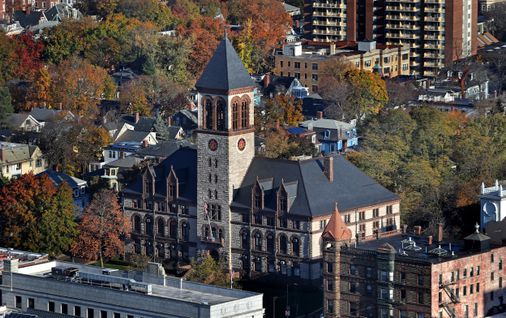 Cambridge has used ranked-choice voting for 80 years. But it’s almost nothing like what November’s ballot question proposes

Robert Winters has been a busy man.

With a November ballot question calling for ranked-choice elections in Massachusetts, people have been asking — “pummeling" him, he said — about Cambridge’s own ranked-choice system, hoping to plumb the mathematician and election guru’s deep well of expertise before they vote on the statewide proposal.

His advice comes with a disclaimer. “It has so little to do with the Cambridge system," Winters, who runs the Cambridge Civic Journal , said of the state ballot question. “Other than the fact that we rank candidates.”

Used since 1941, the system known as proportional representation allows Cantabrigians to rank their choices for City Council and School Committee. At one time, it was the only municipality in the country to elect its City Council through such an at-large system, according to a study by the nonprofit FairVote , and is one of 19 cities, counties, or states currently using some form of ranked-choice voting.

It’s reshaped the ways candidates in Cambridge say they campaign, motivating them to focus less on contrasting themselves from others, including with political attacks, and more on expanding their appeal to a wider base. Cambridge’s elections are often bursting with candidates, enough so city officials last year discussed limiting how many choices people could rank on what become an “ unwieldy ” number of contenders for the physical ballots.

And Cambridge’s City Council has a history of diverse, barrier-breaking members, including the first Muslim elected to a government post in the state, the country’s first B lack, openly lesbian mayor , and, this year, the first Muslim mayor in Massachusetts history.

They are the type of outcomes supporters of the ballot question say a statewide system can also offer. But beyond the obvious similarities to the state proposal, Cambridge’s ranked-choice system is layered with such complexity — and its political environment’s own idiosyncrasies — even ranked-choice voting backers preach caution in extrapolating the experience in one of the state’s progressive bastions to Massachusetts as a whole.

“Cambridge is a little bit different, which is kind of what we like, I guess,” said City Councilor Marc C. McGovern, who, like the city’s mayor and two of the three state representatives who live in Cambridge, support the ballot question. “I do have some issues with the way that Cambridge counts its votes. I think we make it overly overcomplicated.

As proposed in Question 2 on Massachusetts' November ballot , ranked-choice elections would give voters the option of ranking candidates for an office in order of preference. If a candidate gets more than 50 percent of the first-choice votes, he or she is the winner. But if no one does, the candidate with the fewest votes is stripped away and those voters are reallocated to the remaining candidates based on their second choice.

The process goes for as many rounds as it takes for one candidate to earn a majority of votes.

Cambridge voters, too, rank their choices for municipal office, but the differences proliferate from there. As opposed to the statewide proposal, which would apply to one-winner elections, Cambridge’s system is used for citywide races where there are multiple winners: nine on the City Council and six on the School Committee.

In sorting the winner, Cambridge also uses a quota system that sets a floor of ballots a candidate must reach in order to be elected. That’s determined by using a mathematical formula, in which the total number of valid ballots cast are divided by the number of positions to be elected plus one — before adding one.

When the ballots are counted, it gets more complicated. Those who hit the quota in the first round are elected, but should not enough candidates reach it to fill the council or committee, a two-way system of redistribution begins.

For those candidates who won election, their surplus votes — or the number they earned beyond the quota — are redistributed, somewhat randomly, using what’s called the ‘ Cincinnati Method ’ and based on those voters’ No. 2 choice. For example, if a candidate needed 2,501 ballots to win a seat but earned 2,801, then 300 of their voters are transferred elsewhere.

Furthermore, the candidate with the fewest votes after each round is also eliminated, and his or her ballots are, too, transferred based on the voters' next preference.

But as candidates hit the quota, they no longer are allowed to take on transferred ballots. That means the counting can stretch deep into the process until all the candidates have been eliminated, except the nine winners on the council and six on the School Committee.

The tabulation process can be so complex, former vice mayor Jan Devereux includes a video on her campaign website explaining how the system works, using a “zoo council” race in which a bear was the top vote-getter as an example.

Similar to what’s proposed on the ballot question, Cambridge residents can rank as many or as few of the candidates as they want. And many voters do go deep into rankings. In the City Council’s 22-candidate race last year, more than 5,400 ballots, or about one-quarter of 21,324 cast, ranked exactly eight or nine candidates, according to data compiled by Winters. (It may have been affected by the fact that two coalitions ran slates of recommended candidates, one with eight, the other with nine.)

Usually, Winters said, the median for rankings is five on a ballot, and the average is about seven, though that can be skewed by the outliers who rank every, or almost every, candidate.

“I focus on the ranking. Because the rest of it is confusing,” Sumbul Siddiqui, Cambridge’s mayor and a second-term councilor, said of the tabulation process. “Voters need to be more informed of all the candidates running. I had to do it with my own mom. And she had to do it with her friends. ‘Vote for my daughter No. 1 and here is who she likes to work with.’ ”

The ballot question’s opponents argue that adding a new layer of ranking to statewide races could unnecessarily confuse voters. Those in Cambridge, acknowledging the benefit of decades of experience, say the very act of ranking does not inherently frustrate voters, noting just 85 ballots were ruled invalid in the 2019 election, or less than 1 percent, and just 72 were the year before.

But determining how to vote can be one part strategy, one part political parlor game in Cambridge. People sometimes bullet vote — casting a ballot for just one person and not ranking anyone else — but that runs the risk of having the ballot exhausted in future rounds of tabulating.

Winters advises people to not only identify the candidates they prefer but the ones they don’t like, and to exclude them from their rankings. Candidates, as they did in 2019, also run as slates, encouraging people to both vote for them and to rank like-minded contenders — though elected officials acknowledge getting a voter’s No. 1 vote remains the goal.

“Nobody puts on their lawn signs, ‘Vote for me No. 3,' ” said McGovern, the city councilor.

If anything, elected officials say ranked-choice voting means political survival is not guaranteed.

“I probably work harder than a lot of state reps around the Commonwealth every two years,” said Manikka L. Bowman, the vice chair of the Cambridge School Committee, who has lived in the city since 2006. "The first time I voted here, I was like, what is this?

“But it’s something that I’ve come to value and appreciate,” she said, “because I’ve been able to understand how proportional representation works.”