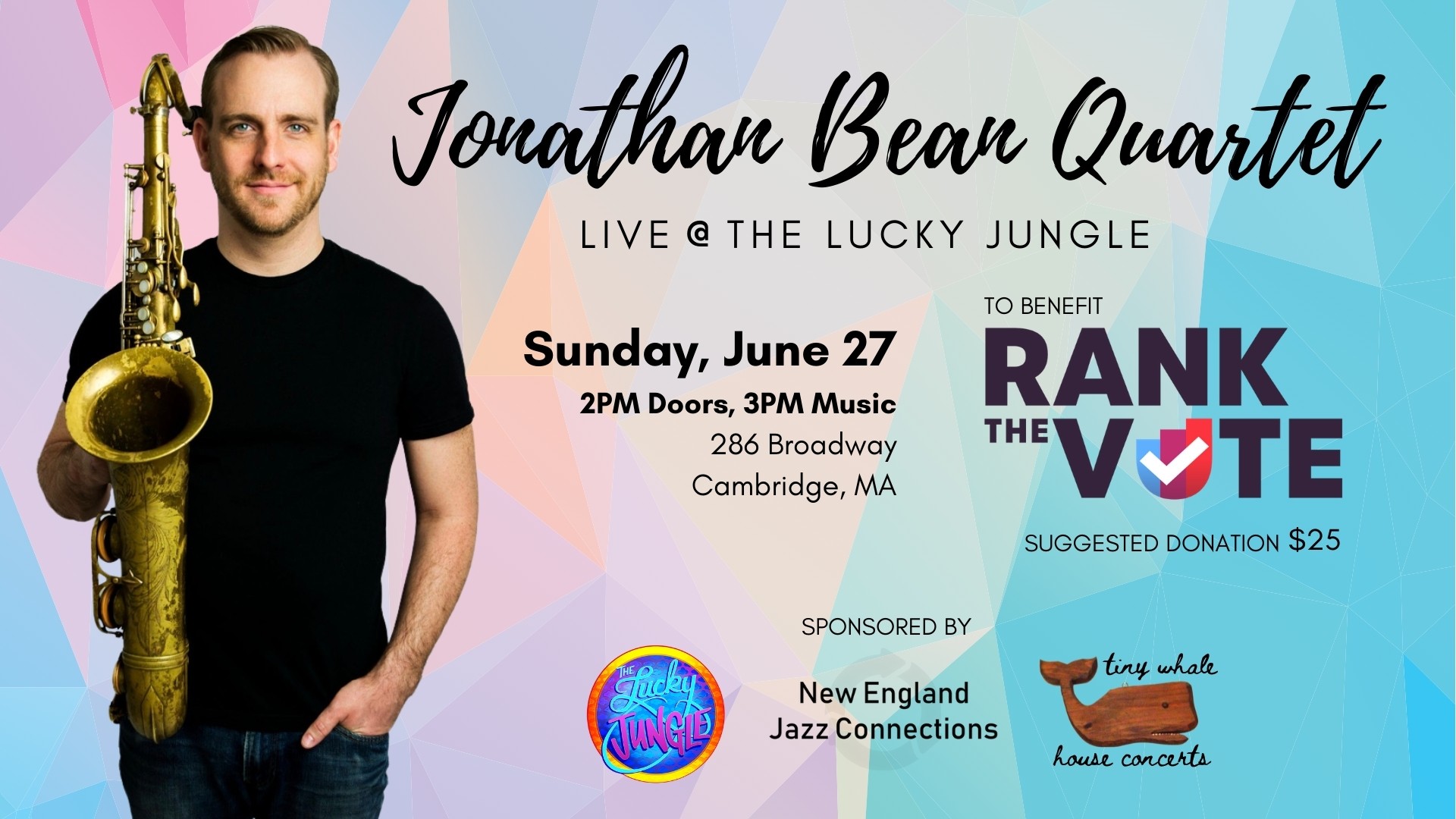 Enjoy modern jazz at a hot new creative art space and support the movement to advance voting rights across the nation. (This is an in-person event in Cambridge, Massachusetts.)

Bring your own snacks and beverages. Suggested minimum donation of $25.

About the Jonathan Bean Quartet

Jonathan Bean is a tenor saxophonist native to New England. He is an active musician in Boston and New York and has shared the stage with Hal Crook, Antonio Sanchez, Chris Cheek, David Liebman, Esperanza Spaulding, Lionel Loueke and Lake Street Dive. He has been a member of the Mark Zaleski Band for 14 years and helped to found The Brighton Beat, an Afrobeat inspired fusion group that has been active for almost ten years, as well as Planet Radio, a jazz inspired R and B/Soul group that has been active for four years and is working on its third studio release.  Jonathan will be bringing to you his  quartet that will be performing original music as well as his take on the Great American Songbook.

About The Lucky Jungle

The Lucky Jungle is a unique artist collective located on Broadway in Cambridge, MA, featuring the work of local artists and craftspersons, with the vast majority of work having been produced during the pandemic or created specifically for their store. We offer specialized art classes in drawing, painting, textiles, animation, UI/UX and more with a skilled team of artists who have cumulatively over 50 years of professional experience in their respective industries.

About Rank the Vote

Rank the Vote is a non-partisan, 501c3 non-profit organization formed to empower people across America to rapidly build grassroots movements for ranked choice voting in their own states, creating the preconditions for successful ballot or legislative campaigns.

Rank the Vote was founded by veteran activists who built the nation's largest statewide movement for RCV -- despite starting with no staff and no money. Our methods are simple and time-tested: organize and educate regular voters so they can spread the word and take effective actions to achieve this common sense improvement to our elections.

Ranked Choice Voting (RCV) is an upgrade to the way that we vote. Instead of choosing just one candidate on your ballot, RCV allows you to rank multiple candidates in the order you prefer them (1st, 2nd, 3rd, and so on). This change to the ballot promises to solve some of today’s biggest problems in American democracy.

Ranking your choices allows you to vote honestly for any candidate, while still allowing you to vote for "backup" choices. If your first choice doesn't get enough support, your vote transfers to your next choice. This means that your vote always stays intact and can never be "thrown away".

Ranked Choice Voting liberates you from being pressured to vote for a “lesser of two evils” front-runner, and eliminates the problem of “spoiler” candidates and similar candidates splitting the vote. RCV incentivizes positive campaigns by requiring candidates to appeal to a broader base of voters in order to win.

Ranked Choice Voting promotes inclusion, diversity, and unity in our elections by allowing candidates with the best ideas, not just the biggest bank accounts, to run and gain support from voters without being seen as spoilers and without splitting the vote. Research has shown RCV to correlate to better outcomes for candidates from historically disenfranchised groups (e.g. women and candidates of color), and candidates who lack access to large donors and political connections.

Ranked Choice Voting has been demonstrated to reduce negative campaigning and attack ads by allowing a candidate to work for the 2nd and 3rd choices of their opponent’s supporters by appealing to what they have in common, rather than focusing on divisive wedge issues. Under RCV, going negative on a voters’ favorite candidate would alienate those voters, dissuading them from giving the attacker their 2nd and 3rd rankings.