Ranked-choice voting would transform Massachusetts elections. But is it constitutional? 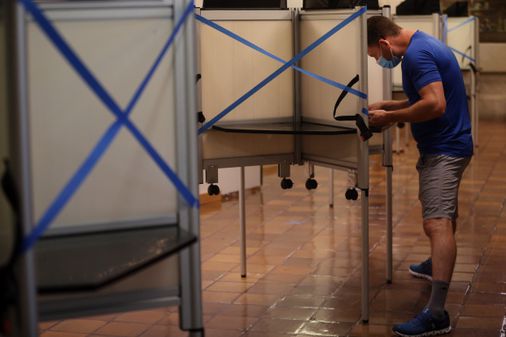 As the policy merits of ranked-choice voting loom large ahead of the fall vote, the proposal to restructure how residents pick many of their elected officials would all but undoubtedly invite legal challenges should it clear the ballot box, attorneys and legal scholars say.

In Maine, the only other place to approve ranked-choice voting on a statewide level, the law has, and continues, to navigate a tortured path of lawsuits and petition fights since its 2016 passage by voters, offering a preview of the potential thicket awaiting the system here.

Formal opposition to the Massachusetts initiative , listed as Question 2 on the ballot , has been slow to form. But its novel nature — and the equivocal wording of a 165-year-old constitutional amendment that determines how several state officers get elected — offers fertile, untested ground for litigation.

And while Attorney General Maura Healey’s office cleared the question after its own legal review, the Supreme Judicial Court, the state’s highest bench, has never directly addressed a ranked-choice system’s constitutionality on a statewide level.

“I suspect it will be litigated. And it’s not a complete slam dunk," said Peter Enrich, a retired Northeastern University law professor, who, like other legal experts, hedged his opinion on the proposal’s constitutional viability given the lack of a judicial opinion. “It’s a legitimate question to be asking.”

Under the proposed system, voters have the option of ranking candidates for an office in order of preference. If a candidate gets more than 50 percent of the vote, he or she is the winner. But if no one does, the candidate with the fewest votes is stripped away, and those voters are reallocated based on their second choice.

The process goes for as many rounds as it takes for one candidate to earn a majority of votes. If approved, the new system would be used for primary and general elections for statewide offices — governor, attorney general, and more — as well as congressional, state legislative, and district attorney offices, starting in 2022.

Yet, there is a possible stumbling block in the Massachusetts Constitution , legal observers said. It states that for offices such as the governor or state legislators, it’s the person with the “highest number of votes” who wins an election.

That language, known as Article 14 of the constitution’s amendments, was approved in 1855 in an attempt to “do away with majority voting” and allow for a plurality vote to decide such offices, according to a 1941 SJC decision on Cambridge’s version of ranked-choice voting. (That city has used the system since that year.)

Maine’s highest court said that state’s original ranked-choice voting law was unconstitutional because of language in its constitution requiring a “plurality” vote for certain offices.

But there are differences between the two. The Massachusetts Constitution uses what Enrich called “not very precise” language in defining what constitutes a winning candidate, offering what attorneys called a possible foothold for ranked-choice voting.

“There is flexibility in determining who is the person having the highest number of votes,” said Gerry McDonough, a seasoned election law attorney.

But McDonough, like others contacted by the Globe, said that because the SJC has never directly tackled the question, he “wouldn’t be 100 percent sure” how a court would decide.

“I can’t predict what the outcome would be,” said Tad Heuer, a partner at Foley Hoag. “I don’t think anyone disputes that you need the highest number of votes to win. It comes down to what constitutes a vote."

Greg Dennis — the policy director for Voter Choice Massachusetts, which backs the initiative — said while the constitution requires that a winner has the most votes, it doesn’t specify how “you must tabulate the vote.” That, he said, would allow for a new system, such as ranked choice, to determine how the count is done.

“We would not have engaged in the very hard work of trying to run a ballot question if we didn’t believe it would pass constitutional muster,” Dennis said. “There’s no telling what somebody might try throwing at the wall to see what sticks. We think we would be victorious in any case that was brought.”

In certifying the question for the ballot, Healey’s office determined that it met certain constitutional requirements. But its review is narrow in scope, and is intended to eliminate petitions that breach “ excluded matters ,” not to offer a bulletproof constitutional approval.

It also sets up a possible conundrum for voters: While they weigh the question’s practical effects ahead of November, they don’t have official word from the state’s highest court if it’s constitutional because no one has asked.

Even in Maine, the Supreme Judicial Court didn’t offer its opinion until months after voters approved it, and only because the then-Republican-led Senate asked for it.

The legal wrangling hasn’t stopped there. As recently as last month, a judge in Maine tossed a lawsuit that sought to bar the system from being used in the state’s heated US Senate race. And on Tuesday, Maine’s highest court blocked a decision that would have allowed a question to undo ranked-choice voting to appear on November’s ballot.

It portends a potentially long legal front here in Massachusetts should the measure pass.

“The ultimate impact of this ballot question may not be known until well after [voters] make a decision,” said Evan Horowitz, executive director of the nonpartisan Center for State Policy Analysis at Tufts University, which is currently working on an analysis of the ballot question.

The debate around ranked choice was further inflamed by the results of the state’s Fourth Congressional District Democratic primary, where Newton’s Jake Auchincloss won with less than 23 percent of the vote .

He joined Representatives Lori Trahan and Katherine Clark as those to emerge from crowded congressional primaries in recent years with relative slivers of support, offering what ranked-choice supporters call evidence of why the state’s plurality voting system needs change.

The Ranked Choice Voting 2020 committee pushing the ballot question is well funded, reporting more than $1.6 million on hand at the end of August despite already spending more than $2.3 million. Nearly $2.4 million of its funding has come from Action Now Initiative, which was founded by John Arnold of Texas, a former energy hedge fund manager and Enron trader, and has spread money to similar efforts around the country.

A formal committee opposing the question, meanwhile, is still being shaped. A group dubbed the No Ranked Choice Voting Committee 2020 filed paperwork with campaign finance regulators the day before the Sept. 1 primary, listing Cheryl A. Longtin of Westford as its chair.

But it has yet to report raising any funds and its organizers declined to comment Wednesday through Anthony Amore, a former Republican nominee for secretary of state. Amore said he’s not a formal member of the committee but was responding to a Globe inquiry on its behalf as an “anti-ranked choice advocate.”

“I’ll leave the constitutional issues to the attorneys, but I see ranked-choice voting as problematic in a variety of practical ways,” Amore said, speaking for himself. “There’s no reason to change the system we have.”

Asked if he supported the concept of ranked-choice voting at a news conference last week, Governor Charlie Baker, a Republican, said he hadn’t thought about it.

“We’ll talk about that some time between now and the election," Baker said, “but it’s not going to be today.”