Ranked choice voting is on the rise. What is it? 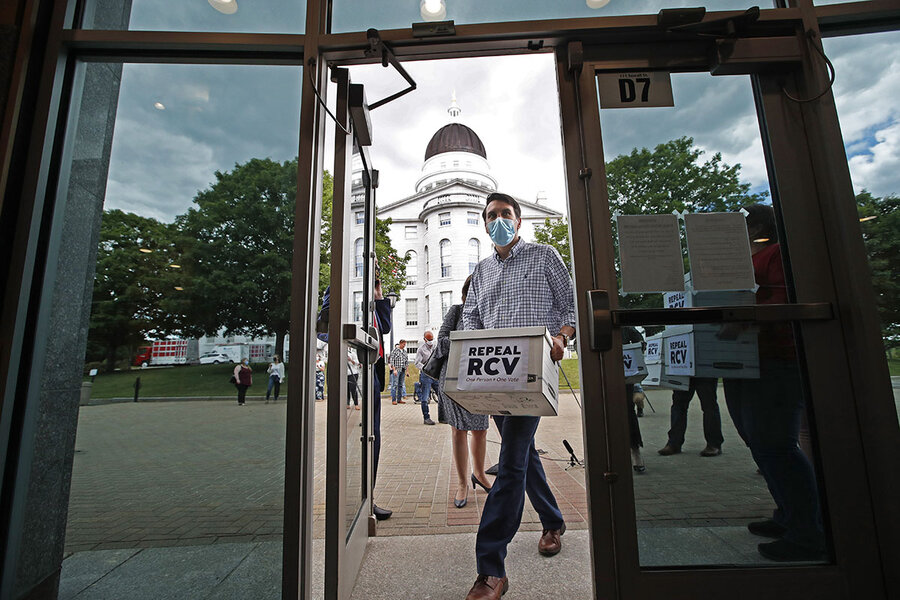 Elections in the U.S. typically use a plurality system, meaning whoever gets the most votes wins. However, that can be less than a majority of the votes cast. Ranked choice voting tries to correct that, and ensure the winner has a true majority.

Instead of voting for a single candidate, voters in Maine will rank presidential candidates this fall from No. 1 to No. 5 – unless a pending last-minute court review changes the plan.

If no one has an outright majority the votes in this system are recounted, with a twist. The candidate with the fewest votes from the previous round is eliminated, and the ballots with that candidate as No. 1 have their No. 2 slot counted instead. This pattern continues until there is a winner with an outright majority.

Critics say this muddies the idea of “one person, one vote.” Supporters say it pushes candidates to appeal toward a majority of the electorate, and allows voters to put their top choice first while also not “wasting” their vote on a long shot. Many states and localities are considering the idea. Maine is an early adopter to watch.

Ranked choice voting might be relatively new to the United States, but it’s been around for a while – both as an idea and in practice around the world. Now Maine may be on track to become the first state to use this method in its vote for president.

The result, proponents say, could be a new degree of empowerment for voters, and boost for the concept of majority rule.

Not everyone supports the idea, and in September a judge in Maine ruled against a petition that would have blocked the system. Additional judicial review is expected in October, but for now the ranked choice method is moving forward in Maine.

How does it work?

Elections in the U.S. typically use a plurality system, meaning whoever gets the most votes wins. However, it’s possible to get the most votes but still win fewer than 50% of the votes cast. Ranked choice voting tries to correct that, and ensure the winner has a true majority of votes. Instead of voting for a single candidate, voters in Maine will rank their candidates from No. 1 to No. 5. (The five candidates on the ballot are President Donald Trump; Democratic nominee Joe Biden; Libertarian candidate Jo Jorgensen; Green nominee Howie Hawkins; and Rocky de la Fuente, of the Alliance Party.) Voters don’t have to rank all the candidates. When the votes are counted, the candidate with more than 50% of the No. 1 votes wins.

It can be as relevant in presidential races as in down-ballot decisions. In 2016, Democratic nominee Hillary Clinton won in Maine, despite not having more than 50% of the votes. (She won 47.8% of the total vote to Mr. Trump’s 44.8%.)

Where is it used?

Though Maine is the only state using ranked choice voting for all voters in federal elections, the voting method is used in various states and municipalities across the U.S. It was used in the 2020 Democratic primaries in Nevada, Wyoming, Alaska, Hawaii, and Kansas.

Massachusetts voters will decide Nov. 3 whether to adopt it for state offices and congressional races, and Alaskans will choose whether to institute ranked choice general elections, including voting for president. It’s also used in one form or another in a growing number of municipalities across the U.S., according to data from FairVote, which advocates for voting reform. Maine is unique in that all voters will be using it to select the president.

Outside the U.S., variations of ranked choice have been used in a handful of countries, including Ireland, Australia, Sri Lanka, and Estonia.

Why use this method?

Advocates say ranked choice voting allows people to vote for non-major-party candidates without feeling like they’re throwing their vote away. For example, Mainers who voted for Libertarian candidate Gary Johnson or Green candidate Jill Stein in 2016 knew their choice probably would not win, so voting for them can feel like a waste. Under ranked choice voting, voters could have still put Mr. Johnson or Ms. Stein as their No. 1 choice, but then their vote would have transferred once those candidates were knocked out.

Since the Maine law was enacted in 2016, it has faced challenges in the courts. The Maine Supreme Court ruled against a Republican-led petition drive to suspend the law. Detractors of ranked choice voting sometimes cite the confusion it can cause: It’s new, and requires voters to understand how to rank candidates. Additionally, opponents say the principle of “one person, one vote” is best served by the traditional system where whoever comes out with the most votes wins – without multiple rounds of counting in different ways.

Ranked choice voting will also require more time and money to tabulate the results if someone doesn’t win a majority on the first round. It could also save money by avoiding the need for runoffs in states that require a majority to elect.

Additionally, ranked choice voting doesn’t always work as planned. One study found that in some U.S. municipalities that use it, if voters don’t rank enough candidates on their ballots – stopping after only marking their first or second choice, for example – the winner can still be someone who won a plurality, not a majority.

Some scholars say that, in an era of polarization, a ranked choice system could tug candidates and parties toward the center as they see value in being voters’ second choice as well as their first. In effect, the system is designed to force candidates to achieve majority appeal, not just plurality appeal.

Supporters also say the system will give the electorate a more honest look at the strength of third parties, as fewer people feel compelled toward “strategic voting” for a candidate who might win, rather than for their preferred candidate.

Could ranked voting change the outcome of an election?

Yes. In the 2018 elections in Maine, Republican Rep. Bruce Poliquin won the most votes after the first counting, which under normal circumstances would have meant he won the election.

However, the state was using ranked choice voting in that election, and Mr. Poliquin had not won more than 50% of the votes. He ended up losing after additional tabulations were made and his opponent ended up with a majority. Political scientists differ on how much and how often ranked choice voting might shake up races across the country overall.

Advocates say ranked choice voting helps eliminate spoilers, i.e., third-party candidates who don’t stand a chance at winning but who still might drain away votes from a Democrat or Republican in a tight race.

Get the Monitor Stories you care about delivered to your inbox.

In Michigan in 2016, Mr. Trump won the state by just 11,000 votes. Neither he nor Mrs. Clinton had a majority. Political observers have speculated about what would have happened if third-party votes, largely for the Green and Libertarian Parties, had been redistributed under a ranked choice system. It’s possible the outcome would have changed.

But in Maine this year, with Mr. Biden polling well, the ranked choice system might not come into play at all at the presidential level.