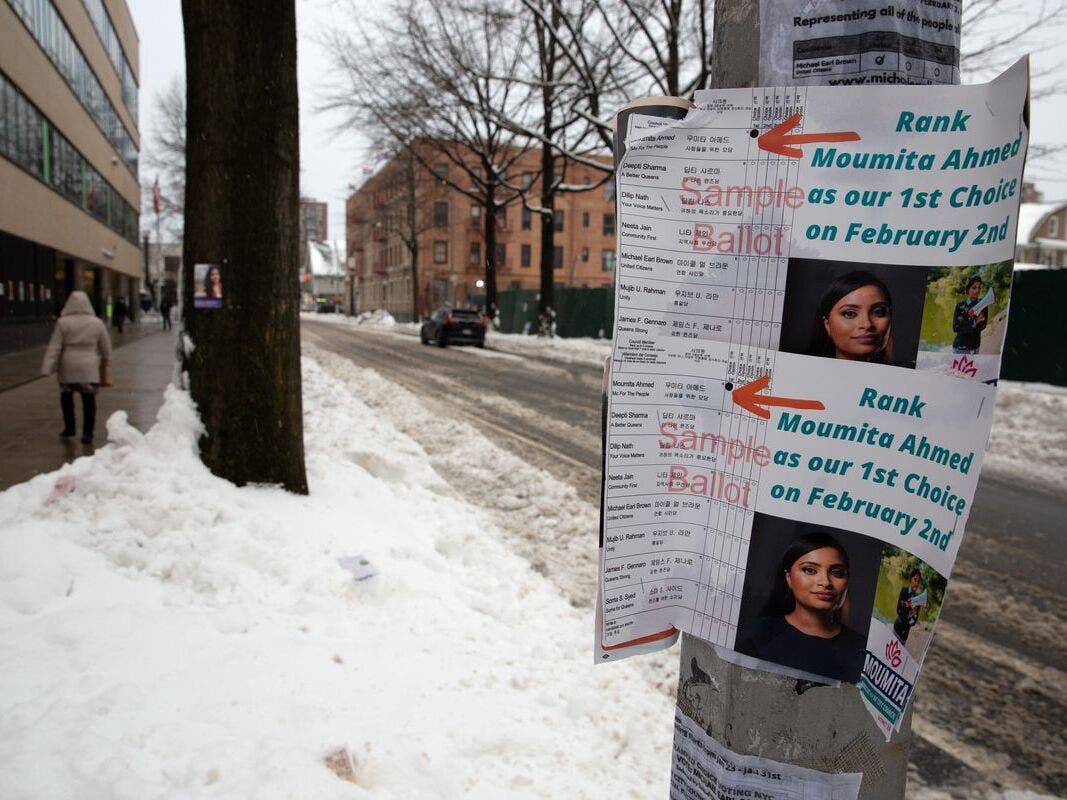 Voting ended for New York City's first ranked choice election Tuesday — with one candidate holding such a sizable lead that counting votes beyond the top pick on each ballot may not be necessary.

Democrat James Gennaro reaped more than 3,200 first-place votes out of upwards of 5,500 cast on Tuesday and during nine days of early voting in the crowded special election contest for a southeast Queens City Council seat.

Up to 2,000 absentee ballots had yet to be counted — meaning it could still be weeks before an official winner is announced in the snow-snagged eight-candidate race.

But if his margin remains above 50%, Gennaro will automatically win the special election, called to fill a vacancy left by former Councilmember Rory Lancman. In that event, no tally of voters' ranked choices of up to four additional candidates will take place.

Meanwhile, the city Board of Election won't even start counting absentee votes for a week.

Susan Lerner, executive director of Common Cause NY, a nonprofit that promotes civic education and participation, said that while voters "should be prepared to wait for results," the ranking process should not delay the BOE.

"The BOE can and must count every ballot carefully," Lerner said.

The winner of the special election will serve out the term, but will need to run in the June primary and November general election to secure a two-year term. Once City Council districts are redrawn based on the 2020 Census, candidates will have to run yet again for the seat.

Under the new voting system , voters can rank up to five candidates, in their order of preference. Voters can also opt to select only one candidate.

Half of the candidates had called, unsuccessfully, on the city to postpone Tuesday's in-person voting, citing the snowstorm that pummeled the city.

But they noted a modest bump shortly before polls closed at 9 p.m.

By the end of the night, 115 voters had passed through the Kew Gardens Hills library pollsite, said poll coordinator Mike Sidell.

Yehuda Pollack, 23, who voted at P.S. 164 in Kew Gardens Hills, said he wasn't given any ranked choice voting educational materials at his poll site. But he came prepared, after reading multiple articles and consulting friends on how the new ranking system works.

There was no line and the "whole thing only took like five minutes," Pollack said, adding that he ranked five candidates and listed Sharma as his first choice.

A teenager who cast his ballot at P.S. 182 in Jamaica also said that voting was "pretty straightforward, pretty easy."

"I had a first choice and a second choice and I got to express that on the ballot," said Rafi Talukder, 18, adding he voted for Ahmed and Syed, in that order.

"We don't see our kinds of people in the government so we just want someone to reflect that."

There are currently no South Asian City Council members, but six out of eight of the candidates in the District 24 race have roots in that region.

'Something People Just Pick Up'

Some 650 absentee ballots had arrived back to the BOE as of Tuesday, the majority of which have been preliminarily deemed valid with no obvious errors like missing signatures on envelopes, said election attorney Sarah Steiner, who is representing Jain. About 1,400 more absentee ballots had yet to be returned.

"Today's unofficial results are not really that informative, although you never really know," Steiner said. "They could coincidentally match up with the final result."

Jagpreet Singh, an organizer with Chhaya CDC who leads ranked choice voter outreach, was confident that ranking tabulations would be "done properly."

Over the last few months, a long list of organizations and city offices including Chhaya, Rank the Vote NYC, Common Cause, the city Campaign Finance Board , and the Queens Borough President's Office, have been hosting ranked choice voting educational sessions to prepare voters in the district.

Despite some opposition — including an ultimately unsuccessful lawsuit filed by six City Council members and a handful of community groups to delay ranked choice voting — Singh said he believed the community had ample opportunities to learn about the new voting process.

"I think given enough time, enough education, it's going to be something people just pick up, much like how early voting has ended up being a pretty big success in elections," Singh said.

He and other advocates now look to the city's next special election, scheduled on Feb. 23 in Queens' Council District 31. Two more special elections are set for Bronx Council seats in districts 11 and 15 on March 23.

Over the course of this year, the BOE will have plenty of opportunities to fine tune the process, he added.

"For D31, hopefully they're ready to go and, by the June primary, everything will be second nature to the folks at the BOE," he said.