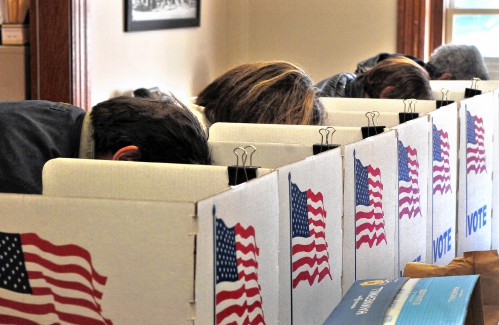 AMHERST — A commission charged with examining how to implement ranked-choice voting for town elections is advising the Town Council to begin the state legislative authorization process soon so it can be in place for the biennial town election next fall.

“The most pressing action needed is to get a special act passed by the state legislature,” states the 53-page report, delivered to council in advance of its meeting Monday, from the Ranked-Choice Voting Commission.

The town charter adopted in March 2018 requires the Town Council to “adopt the proposed measure with or without amendments within 90 days of receipt” so that ranked-choice voting, also known as instant runoff voting, is in place for the November 2021 vote. The ballot will include the 10 councilors selected from five districts, three councilors selected townwide, five School Committee members, six trustees for the Jones Library and three Housing Authority members, all voted townwide, and the elector under the Oliver Smith Will.

Ranked-choice voting is a method in which voters put candidates in order of preference, rather than being capped at voting for one candidate or a set number of candidates.

The commission writes, “the special act should be accompanied by a supporting letter and with this report appended, explaining why Amherst would like to switch to using RCV in its local elections and the groundwork we have already done” and adds that councilors should also contact state Rep. Mindy Domb, D-Amherst, and state Sen. Jo Comerford, D-Northampton, to promote their support of the special act, which will increase its chances of passing

The report observes that the change to ranked-choice voting can be both costly and complicated and that outreach efforts in the community will be needed. Additionally, Town Manager Paul Bockelman should be charged with an implementation plan approved by the council.

While the report doesn’t specify precise costs, it notes that machines in 10 precincts will need to be replaced and other equipment will be needed: “The town does not currently own voting machines that have the capabilities necessary to implement RCV, so new tabulators, a Central Results Calculator, and appropriate software will need to be purchased or leased.”

If the town can afford it, the commission recommends buying the Dominion ImageCast Precinct machine for precinct-level tabulators and use the packaged Dominion Results Tally and Reporting software for calculating the results.

As for complications, the report outlines some of the challenges inherent in ranked-choice voting when multiple candidates will win seats, rather than having a solitary winner. The report also discusses the choice of algorithm that would be used in tallying the votes, an issue that has been wrestled with in other places, including Minneapolis and San Francisco.

One downside of this voting method anticipated is that election results will not be reported as quickly: “The conversion from plurality voting to RCV will require greater centralization of the tabulation and reporting functions during election periods. The current poll closing procedures will not change significantly except that results will no longer be available at the precinct after closing.”