The new generation of a choice: ranked voting

BostonGlobe.com
Readers explain why they support a question on the November ballot asking Massachusetts residents to approve ranked-choice voting.... 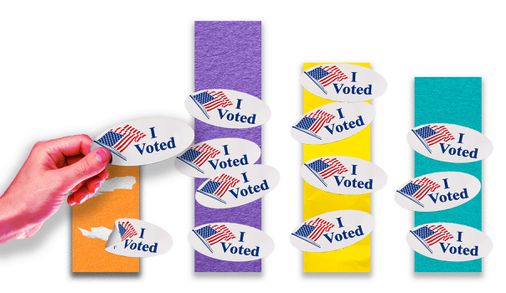 Re “This vote is on voting: Election to offer option: Question proposes ranking choices instead of picking one” (Page A1, Aug. 17): The November ballot question in Massachusetts on changing the voting system that has served us for centuries seems to have engendered much confusion about what is — or isn’t — truly democratic. Those who oppose the change assert that “one person, one vote” is the foundation of our democracy. What they are actually advocating is “one person, one choice,” a slogan that would argue as well for having to decide which one office (senator or representative, perhaps) should get your single vote.

Pure democracy involves government through the will of the majority, where no person’s vote counts more than another’s — the true meaning of “one person, one vote.”

The writer is an assistant professor emeritus at the Massachusetts School of Law.

I like the idea of ranked-choice voting. I don’t believe what the Founders envisioned was a two-party system, and that stark choice seems to be failing us nowadays. I would like to see more parties and choices, because as it is now, these candidates are stifled by the so-called spoiler factor.

Be that as it may, I had to laugh at the quote from the chairman of the Massachusetts Republican Party: “One person, one vote. That’s the bedrock of American elections.” Hello? Has he never heard of the Electoral College?

He valued what works in Cambridge

Thank you to Matt Stout for his thorough article on the ranked-choice voting ballot question. As a former 40-year resident of Cambridge, I have experience with a system that is similar to the one under consideration statewide.

I thought what we did in Cambridge worked quite well. Yes, drawbacks included tedious counting and delayed results. For enthusiasts, however, watching the process in person was a must-see. As the counting progressed and candidates were eliminated, the word spread quickly and the Cambridge Chronicle did its best to keep up.

For Cambridge it has been a great democracy-in-action experience, encouraging widespread interest and participation. I will vote enthusiastically to bring about a ranked-choice voting process statewide.

This could be an antidote to political gridlock

This is an idea whose time has come. We live in an environment of political gridlock between the two major parties, resulting in a paralysis we cannot afford. But independent and third-party candidates are hobbled by the perception that a vote for them is somehow thrown away or that it will tip the election to a less-desired candidate.

Ranked-choice voting on a national scale would allow the respective voter to select, say, Ralph Nader or Bill Weld (who ran on a Libertarian ticket in 2016), as first choice with, respectively, the Democratic or Republican candidate as second choice. If Nader or Weld were eliminated by virtue of a third-place finish, the voter’s preference for one of the other candidates would still be counted.

Increasing the viability of third-party and independent candidates would result in increased responsiveness to the demands of the electorate by all candidates.

Option doesn’t have to be as complicated as it seems

Thank you for your story about ranked-choice voting. Such a system would ensure that the candidate with the most support will get elected, since the votes for the candidates with less support would get distributed to the other candidates until there is one winner who surpasses 50 percent of the total.

Without knowing this, many Massachusetts voters in November will be reluctant to support the ranked-choice voting ballot question. They might think they would have to fill out and rank their entire ballot in future elections. That would be absurd.

This point should be made clear so that voters aren’t scared away.

At last, a chance for moderate voices to drown out the extremists

Most discussion of the upcoming state ballot question regarding ranked-choice voting has overlooked what I believe is the most important advantage of such a system. Ranked-choice voting is our best chance yet to overcome the destructive political polarization that grips our country.

Our current system has a strong tendency to offer voters the choice between two major-party candidates who represent the most extremist views of their respective party. This is largely because the primary process tends to be dominated by the more extreme elements of a given party. As a result, the overwhelming majority of ordinary people do not like either candidate, and would much prefer a more moderate choice who is willing to compromise and respect good ideas from both sides of the aisle.

But even if such a candidate enters the race as a third-party or independent candidate, they stand no real chance because most people do not want to “waste their vote.” So most voters simply hold their nose and vote for the candidate they dislike the least.

With ranked-choice voting, you do not have to worry that your vote will be wasted. If this were done nationally, then, for example, you could vote for the moderate candidate you truly believe would be the best president, and then rank the major-party candidate you dislike the least as your second choice. If the moderate doesn’t gather many votes, then your vote automatically becomes treated as a vote for the major-party candidate. However, if enough people believe as you do, then the moderate could actually win.

Over time, this type of system would encourage more, and more highly qualified, moderates and independent thinkers to enter the race.

Without ranked-choice voting, the system will continue to be essentially owned by the two major parties.

The primary process whips up the partisan base

I was glad to see the Globe focus on the ranked-choice voting ballot question. I am very much in support. This system addresses the issue of the “tyranny of the minority.” Normally we think: Everyone votes, and the most votes win, so that must be the so-called will of the people, or the will of the majority. However, in many cases this is not what happens.

These days, candidates do very well by whipping up a partisan — and often more extreme — base of supporters. This gets them through a party primary, and then, come the election, we have what we have. Ranked-choice voting sets the stage for a more nuanced and actually representative candidate to succeed.

Our country is suffering now from the results of having an administration that does not represent the views of most Americans, and this is dividing us more. If we were to have ranked-choice voting on a national scale (and get rid of the Electoral College, please), it would lead to beneficial changes. It may be the most important and positive change we could make in my lifetime to save our democratic system.