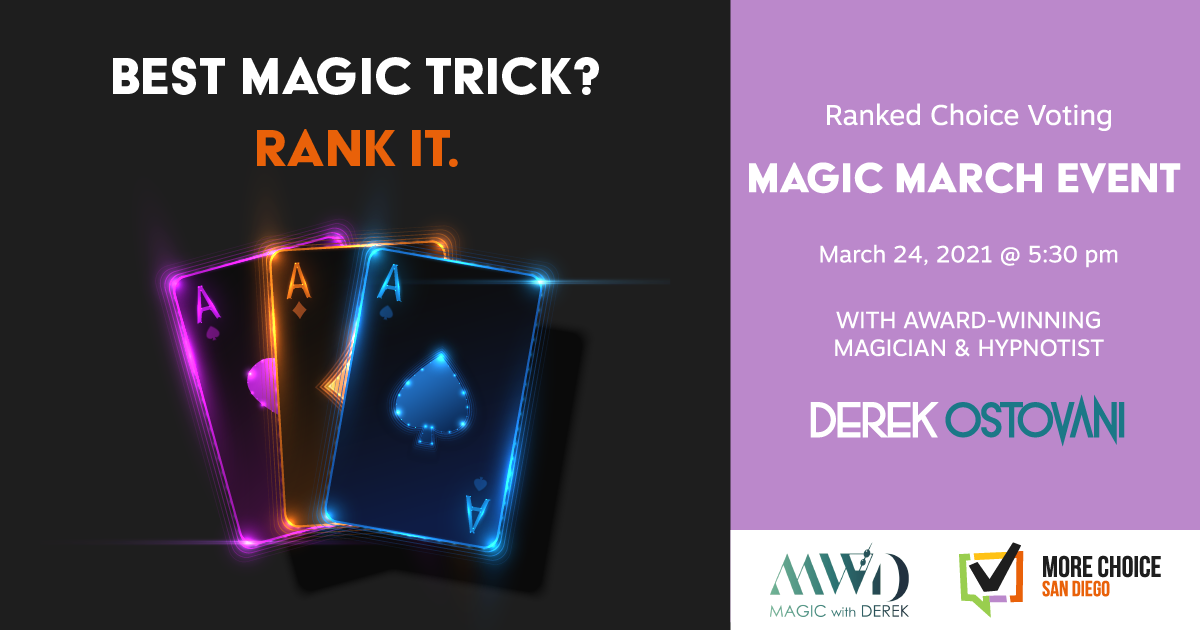 When representatives from the League of Women Voters , RepresentUs , and the Independent Voter Project first met in 2019, political insiders said it would take a miracle to bring an innovative election reform to the City of San Diego that would allow voters to “rank” four candidates in the general election, instead of choosing just one.

In 2020, while COVID was putting the brakes on much of the world, more than a dozen organizations and thousands of local residents formed the More Choice San Diego coalition and came just one vote shy of convincing the San Diego City Council to place the revolutionary election reform on the November ballot.

This time, the More Choice coalition is starting with a mountain of enthusiasm locally, a national support group, and … a magician.

On Wednesday, March 24, at 5:30 PM (Pacific), the More Choice Coalition is hosting its first (virtual) event in partnership with San Diego’s own magician, Derek Ostovani . Ostovani began his career as a structural engineer, and twenty years laters, is an award-winning magician, including being nominated for “Best Trick of the Year” by Penguin Magic.

The virtual event, appropriately titled RCV Magic March , is open to anyone interested in magic tricks and better elections, even if you’re not in San Diego.

At the event, Ostoavani will select participants from the audience to perform 4 different styles of magic tricks. When he is done, the audience will get a chance to rank the tricks in order of their most favorite to their least favorite.

Participants will then learn the “magic” of how ranked choice voting can help elect better candidates.

Ranked choice voting has gained popularity in recent years, with landmark reforms being passed in two states (Alaska and Maine), and in dozens of local elections including New York City . Proponents of RCV argue that, under traditional election systems, voters are held hostage to a “lesser evil” mentality, voting against candidates they don’t want to win, rather than for the candidates they like best.

Interested in experiencing the magic of ranked choice voting for yourself? Sign up for the event here !