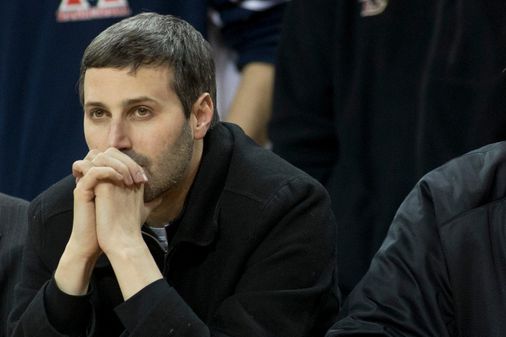 Celtics assistant general manager Mike Zarren arrived in Orlando Aug. 22 and spent more than a month supporting the players in the NBA bubble.

It was an isolated time. He quarantined in his hotel room for a week, and even when he got out, there wasn’t really anyplace to go besides the arena, where he would watch his team come within two wins of the NBA Finals.

But Zarren’s idle hours were filled quickly. In addition to scouring film of draft prospects, communicating with fellow front office members back in Boston, and checking in on his players, he was focused on helping bring ranked-choice voting to Massachusetts.

“Given that we don’t know the dates when anything’s going to happen in the NBA offseason,” Zarren said, “it’s nice to have something I can be involved in winning, and see where it goes.”

Zarren’s interest in the cause swelled from a curiosity to a passion over the past year. He ultimately joined the campaign’s board that worked to get a ballot question approved. In this election, voters will decide whether ranked-choice voting will replace traditional plurality voting in 2022.

Maine is the only state to use ranked-choice voting statewide, although many cities, like Minneapolis and San Francisco, use it for municipal elections. Alaska is voting on it this year, too, but Zarren believes Massachusetts has a chance to truly take the lead.

“If you believe in a democracy, the outcome of an election should represent the will of the majority of the people,” he said. “And you don’t have that with our current system.”

Zarren read an article about Australia’s use of ranked-choice voting in The Economist about 25 years ago and was intrigued by the idea. Then, in 2016, Maine voted in favor of the practice. In June 2018, after Maine’s first elections with the new system, Zarren posted his congratulations on Twitter.

He then received a response from the Massachusetts ranked-choice voting campaign, which was just in its infancy, asking for help.

“And I said sure, and quickly got involved,” Zarren said. “It was a small, all-volunteer effort then with no funding. One of the neatest things about this is it’s been a citizen-led initiative from the start.”

Zarren began recruiting volunteers and leading fund-raising initiatives, including one that was held at the Celtics practice facility. It seemed there was enough interest and momentum to move forward, so last fall the group launched its signature-gathering campaign in hopes of securing the 80,000 needed for the state legislature to consider enacting the law. They collected 111,268.

But after the pandemic hit, the measure was essentially set aside, and since it did not become law by May 5, a second round of just over 13,000 new signatures was required to get it on the November ballot. They gathered about 28,000.

Zarren said the greatest challenge in convincing voters is that many simply do not understand the concept, so an advertising and marketing push was aimed at fixing that. Zarren has also led Zoom discussions about the topic, and is willing to speak to whoever will listen.

“Mike’s a natural leader, and he cares,” said Cara McCormick, the campaign’s chair. “And that’s a very important thing. He cares deeply about trying to do something right now to fix our broken system.”

In addition to ensuring that the winner of an election has the support of a majority, Zarren said he is passionate about the project because it strongly discourages negative campaigning. Supporters of ranked-choice voting say a candidate is less likely to bash an opponent whose base can rank everyone else. Also, it would force candidates to be more aware of their entire constituencies.

“The current system, in many ways, makes people from minority and underserved communities feel disenfranchised,” Zarren said. “If you can win with only 20 or 30 percent of the vote, you don’t need to appeal to everyone. One effect of rank-choice voting is in communities big and small that have used it, they found there’s just more voter involvement in all communities, because candidates have to reach out to everyone to get second- and third-place votes.”

McCormick said the Celtics assistant general manager, who has never worked in politics before, has provided a fresh perspective.

“He’s not looking at it in the same way that other people do, because he doesn’t come from the same world,” McCormick said. “And this campaign in general is sort of lovely in that way. It’s very much people who are not necessarily part of the normal political class getting involved.”

Even though ranked-choice voting is a nonpartisan issue, Zarren said he did not reach out to any Celtics seeking their support, although he did briefly describe the process to a few of them during the Orlando bubble. Over the next three weeks, as the NBA offseason starts to rev up and election night nears, Zarren does not anticipate getting much sleep. But he wouldn’t have it any other way.

“The next month is going to be busy, because the draft is coming up, and I think this is really, really important, too,” he said. “We have a chance. Maine is a small state and we’re a much bigger state. If we can do it here, then other places can do it, and we really can make a difference in the world by improving our democracy.”